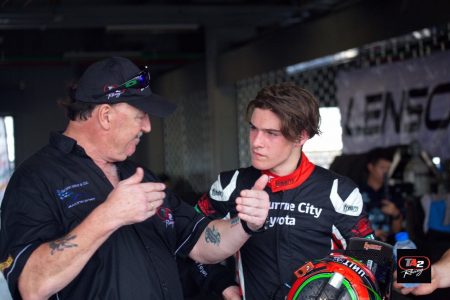 It has been confirmed that 16-year old Jaylyn Robotham will compete in the 2019 TA2 Asia Racing Series. The Series will see a total of five rounds throughout the year, totalling 10 races.

Robotham has recently competed in his maiden season in the 2018 Toyota 86 Racing Series, where despite missing out on competing at Bathurst due to an age discrepancy; managed to finish off fifth overall for the season.

Earlier this year, the 16-year old was lucky enough to embark on a trip of a lifetime to Thailand to see first-hand the TA2 Series, with his management agency Push Talent Management and mentor, David Reynolds.

After the young Victorian was given the opportunity to test-drive one of the TA2 Asia racing cars, Robotham knew it was a challenge he wanted to further pursue.

“It was an amazing trip earlier this year, seeing the TA2 Asia Series and having the opportunity to get behind the wheel of one of the cars was just awesome,” admits the young racer.

“Craig Corliss from TA2 Asia and all the crew were so welcoming and so it was an easy decision to commit to racing in the Series next year.

“It’s a step up from the Toyota 86, it’s obviously a different car, with more power; so, I can’t wait to get out there and give it a red-hot crack!”

Robotham will compete in a 6.2L Mustang, with 525 horsepower. Each car has a version of the paddle shift and a 6-speed sequential transmission. All cars are also equipped with rear wheel traction control, which also helps to manage tyre life. For more on TA2 Asia racing, visit; https://www.ta2asiaracing.com.

Push Talent Management have also announced that there is a co-driver position available alongside Jaylyn Robotham, where expressions of interest can be directed to [email protected] There is an opportunity for up to five drivers to be considered (1 per round).

Keep up to date with all of Jaylyn Robotham’s racing via Facebook @jayrobothamracing as well as https://www.jaylynrobotham.com.au.