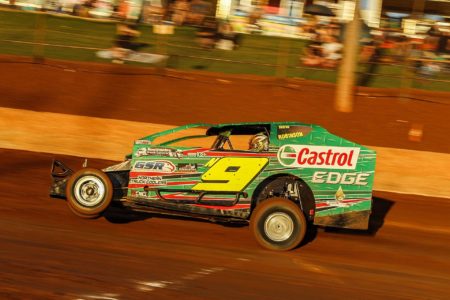 It was a case of close but not close enough for Mark Robinson during his attempt to win last Saturday night’s Queensland V8 Dirt Modified Title at Brisbane’s Archerfield Speedway.

Aiming to add to his previous 2018, 2014 and 2004 Queensland Title triumphs, Robinson came close to achieving that, after he was passed in the latter stages of the feature race by eventual winner Kevin Britten and therefore had to settle for second.

After starting the Queensland Title deciding feature race from pole position, Robinson paced the field for the majority of the 30-lap distance, but a late stoppage, which was compounded by the setup aboard his NSW # 9 Castrol / Southside Truck Centre supported Troyer going a little off, spoiled his chances of a fourth Queensland Title win.

“My team did a great job with the car throughout the night, but I’d be lying if I said I wasn’t disappointed to miss out on the win,” expressed Robinson about his Queensland Title campaign, which doubled as the opening round of the 5 Star Dirt Series.

“In the closing stages of the feature race, the car’s setup went a bit off and at the same time there was a stoppage, and it was a combination of both of those things that led to me losing the lead and then being unable to get the lead back off Kevin (Britten).”

Prior to the feature race, Robinson was the form driver throughout the heat-race action, with him claiming a win and a pair of seconds from his three heat races.

Looking towards the remainder of the 2020-21 season, Robinson’s next major event outing is going to be the second round of the Five Star Dirt Series that is to be held at Grafton Speedway (NSW) on the Saturday night of March 13.

Robinson and his team are proudly supported in the 2020-21 season by the following sponsors: