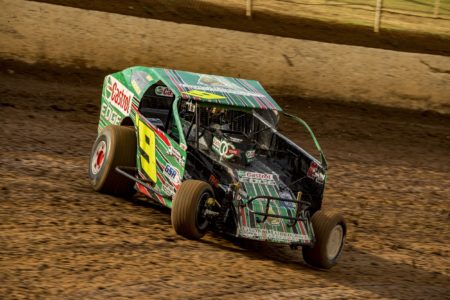 The NSW # 9 Castrol Oils / Southside Truck Centre supported Troyer pilot has ran a total of four race meetings and shown front-running pace on every occasion, and it has so far been highlighted by a feature-race win at Grafton Speedway.

On Saturday night at Toowoomba Speedway, Robinson came awfully close to recording his second feature-race victory of the season. He fought tooth and nail throughout an exciting 20-lap event by running inside the top three and went on to greet the chequered flag only half a car length behind winner Andrew Pezzutti.

“It was an exciting feature race where there was plenty going on from start to finish, and it was good to be a part of it all,” commented the three-time Australian V8 Dirt Modified Champion.

“Although there is a little bit of disappointment missing out on the second win of the season, at the same time, I’m really happy with the performance of the car and the continued efforts of my team.”

Apart from his two podium results so far this season, Robinson’s over two outings have seen him hampered by mechanical woes, which saw him fail to start the feature race in the season opener (Lord Mayor’s Cup) at his home track – Lismore Speedway – back in October due to engine issues and more recently late last month at Brisbane’s Archerfield Speedway, where he had qualified on pole position for the feature race, but he was unable to finish due to a mechanical problem.

“I’m really looking forward to the Christmas-New Year period and getting a lot of racing under my belt, and the goal is to build on our fast start to the season,” added Robinson.

Special thanks must go to Robinson’s pit crew Larry and Jake, along with his mum and dad: Faye and Steve, his wife Chloe and their three kids, and the rest of the team and supporters.