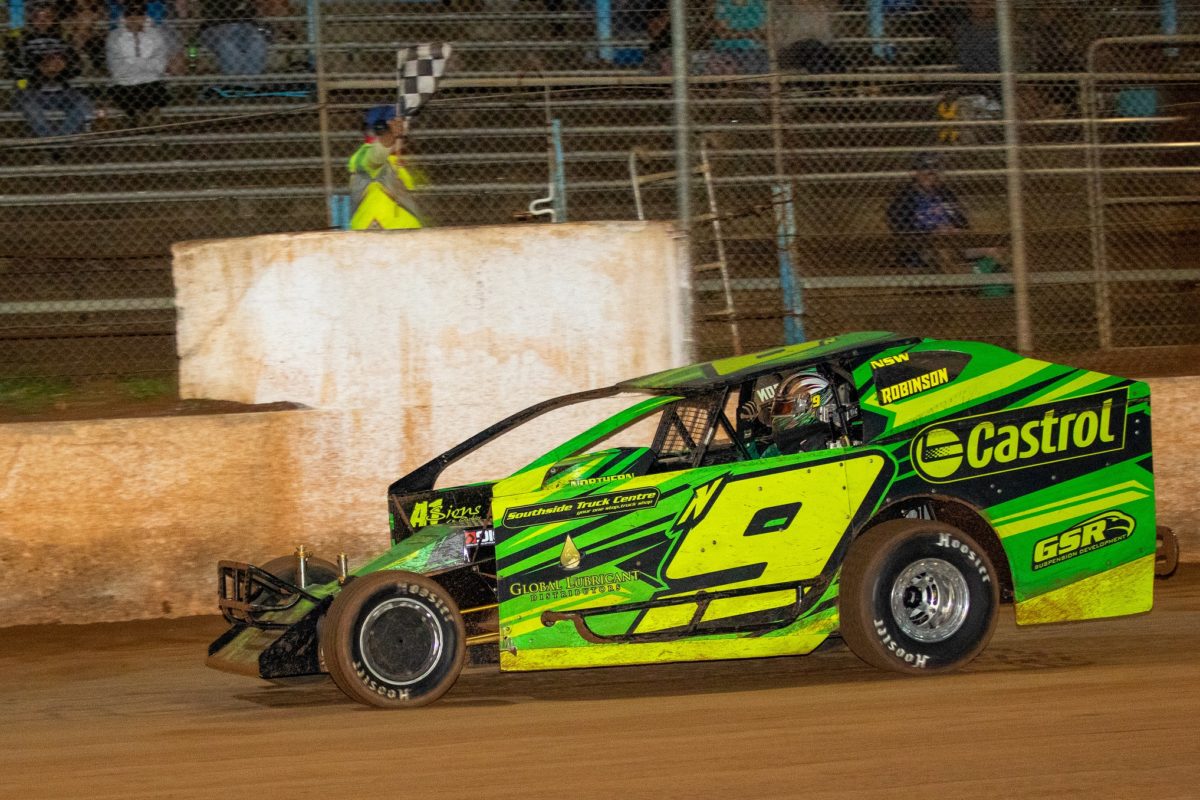 AFTER an absence of nine years and numerous minor podium place finishes along the way, Mark Robinson reclaimed the Australian V8 Dirt Modified Title, which took place at Brisbane’s Archerfield Speedway in Queensland.

In what was his fourth Australian Title victory, Robinson was in fine form throughout Saturday night’s one-night show, which doubled as the opening round of this season’s 5 Star Dirt Series, after he had qualified second for the Australian Title deciding feature race and then went on to dominate the entire 35-lap journey.

“It’s both a very satisfying and exciting feeling to win another Australian Title, not just for me, but for my pit crew and family, as we have all worked hard in so many areas to achieve this success,” expressed the driver of the NSW # 9 Castrol / Southside Truck Centre supported Troyer.

“I feel that going back to the one-night format really suited our team, as we just had the one night to focus on and it had been well over 10 years since we had an Australian Title held over a one-night format.”

Winning his fourth Australian Title was something really special to Robinson, but so, too, was being able to do it in front of his family.

“My wife and the kids allow me to go out and enjoy my speedway passion, and as they aren’t able to travel much with us, it was wonderful to have them all there to see me win another Australian Title, as the kids were only babies when I won my last one,” explained the Lismore, NSW-based racer, who has now claimed a total of 12 Australian Title podium finishes over a span of two decades.

“Another special moment for me from Saturday night was joining my dad (Steve) as a four-time Australian V8 Dirt Modified Title, and apart from our love for speedway, it’s something we get to share together, as not a lot of father and sons get to, as he knows exactly what it means and feels like.”

Throughout Saturday night’s Australian Title decider, Robinson, who had earlier in the night finished his three heat races with a win and a pair of third-place finishes, knew amongst the whole field that his biggest threat came from defending and five-time Australian Champion Kevin Britten.

“Kevin (Britten) was the form driver and obviously the one to beat, so to be able to qualify ahead of him for the feature race was a good feeling, but I knew that I had to get to the front early and stay there,” Robinson said.

“I got to the lead early on and set the pace, as I had the bottom of the track working really well throughout the night and it paid off. Kevin was right there for most of the race, but I knew that I had to keep hitting my marks, which is what I managed to do, and I went on to hold him off for the win.”

In a class that is currently seeing an influx of young drivers, Robinson, at the age of 43, is showing everyone that he isn’t slowing down, and there was no better proof of that than him claiming his fourth Australian Title win.

The next outing for Robinson and the team is going to be the NSW Title at his home track – Lismore Speedway – on the Saturday night of February 5. The NSW Title is going to double up as the second 5 Star Dirt Series round.

Robinson and his team are proudly supported by the following 2021-22 season sponsors: