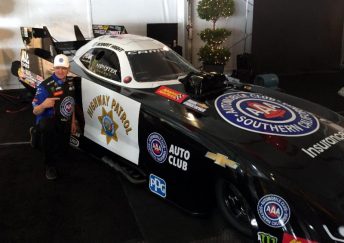 Robert Hight with his tribute livery for Pomona

The CHP scheme will run in the Circle K NHRA Winternationals at Auto Club Raceway at Pomona this weekend, as well as the Auto Club NHRA Finals here in November. The unveiling was made at the NHRA press conference.

“To get to run a CHP car is pretty cool,” Hight said. “It fits the theme that NHRA put together. When I told Tom McKernan from Auto Club, he was so excited about it because the CHP and Auto Club do a lot of things together. When Pomona is over, I’m definitely going to have the world’s fastest Highway Patrol car.”

The black-and-white Chevrolet is designed to look like a CHP cruiser and will help bring awareness to California’s Move Over law.

The Move Over law, passed in 2007 and amended in 2009 to include tow trucks and construction vehicles, requires drivers to move over a lane to the left when safe to do so and/or slow down if they see a stationary emergency vehicle displaying flashing lights.

“If you’ve driven on a California freeway, you’ve seen the message on illuminated signs all over the Southland: ‘Move Over or Slow for Workers. It’s the Law,’” said Kathy Sieck, Auto Club Senior Vice President of Public Affairs and Publications. “California, like every state in the union, has a move-over law designed to protect first responders, and these laws can literally be life-saving. We want to make California drivers more aware of their responsibility so we can keep our roads safe and help protect those who protect us.”

The NHRA Salutes First Responders program will highlight police, fire, medical and recovery services and the military during the 24 races on the 2017 schedule.

“It’s very cool that NHRA is saluting the first responders,” Hight said. “It just fits in Auto Club’s wheelhouse because they really get behind the CHP. I look at the service providers at Auto Club as first responders. When somebody’s having a problem, they call the AAA agents, who get the techs out to the customer. That’s a first responder; they’re helping Auto Club members, just like the CHP, ambulance, fire departments.”