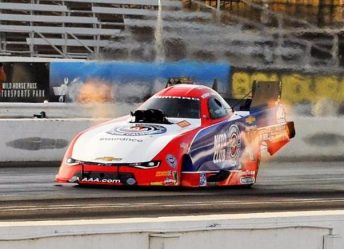 Hight said the goal of his initial run was just to get accustomed to the car.

“It’s really nice to get out there and get that first one under your belt,” Hight said. “(Crew chief Mike) Neff said to go to half-track. When you make first runs of the season, you’re behind the car because it’s fast. You haven’t been in it, and you’re not used to it. But I could tell it was running (well), and I didn’t want to lift at half-track, so I took it a little further.

Despite shutting the car down early, Hight said “that run was a baseline” for the rest of the test and the beginning of the 2017 season. The other two runs, he said, weren’t as strong.

“It was like how we finished the year off,” Hight said. “Once we’ve got that, now we start plugging things in and trying and testing. We know we could go back to Pomona and qualify with what we had at the end of the year. We’re here to test and try to get better, and that’s what we’re doing from here forward.

“We’re going to try some things and try to learn to get better and run quicker. We shook weak on the second test run, and on the third one, we broke two rods right when I stood on the gas, and we didn’t learn a thing.

“We’ll regroup and try some new things tomorrow. You’re going to have to run low .80s to leave here Sunday with low ET. That’s our goal.”