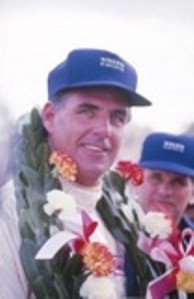 New Zealander Robbie Francevic who ruled the race tracks in Australia in the late 1980s will be a guest at the Gnoo Blas Classic car spectacular and enthusiasts’ dinner at Orange on February 7 and 8.

Almost everything on wheels will be on show at the Classic in Jack Brabham Park, which will commemorate the 60th anniversary of the first international race meeting held in Australia at Gnoo Blas in 1955.

Francevic won a string of touring car races in New Zealand, including the inaugural Wellington Street race, and was the first driver to be inducted into the Motor Sport New Zealand Wall of Fame.

He raced in Australia in 1985 with Mark Petch with good success before making an assault on the 1986 Australian Touring Car Championship, which he won in a 240T Volvo.

The Volvo was so fast Confederation of Australian Motor Sport officials started a relentless campaign of engine and turbo strip-downs because they thought he must be breaking the rules.

Francevic drove at Sandown and in six Bathurst’s, one with co-driver John Bowe in the Volvo, and in a BMW and Ford Sierra with top six placings.

He also raced in the ARCA championship in the United States, which was the then series below NASCAR, and was crowned Rookie of the Year. He had the chance to return to the US to race in the main NASCAR championship but had gone home to get married.

Racing in the US cost him the chance to race Formula One in Europe and the opportunity was given to Denny Hulme.