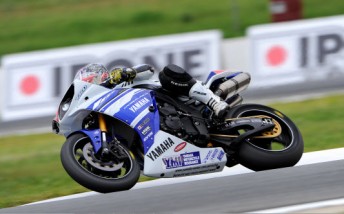 Much has been written about the status of the 2014 Swann Insurance Australasian Superbike Championship, and how it continues to grow from strength to strength.

And developments over the past six weeks have proven what a lot of people already knew – that it is the premier roar racing series being run in Australia.

One rider who has thrown his support behind the development and improvement in the series is Yamaha Racing Team pilot, Robbie Bugden.

Bugden believes that having the best riders and teams taking part in the same competition is the best possible scenario for the discipline in Australia.

“It all had to come to a head sooner or later, and it’s a shame it didn’t happen a little bit sooner,” Bugden said.

“It’s much better for the sport and I hope that moving forward it just continues to go from strength to strength.”

While Bugden admitted that there were some positives in riding as part of the ASBK series, there is no doubt that the Swann Series represents the future of the discipline.

“I think the ASBK certainly had its strong points but it obviously had some major troubles as well, but like I say we are all together now in the ASC which is proving to be quite a championship.

“It’s been a long time coming to have one series and I am sure it will improve as time goes on.

“I think Terry (O’Neill) is doing a pretty good job and there are a few refinements to be made, but I think it’s good and there is a really positive vibe around the sport which is the most important thing.

“If we can just keep that going, and keep everyone excited, keep building and making it bigger and better, then I think for the next few years we should be feeling pretty optimistic about it.”

Round three of the 2014 Swann Superbike Series will take place at Queensland Raceway from June 27-29.