Rob Huff wins on his Chinese championship debut with Volkswagen

Rob Huff wins on his Chinese championship debut with Volkswagen 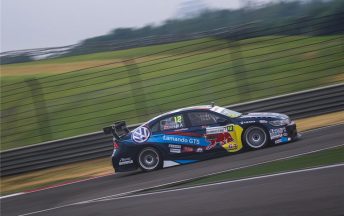 Rob Huff has taken a comfortable win in his first race in the 2017 China Touring Car Championship at the Shanghai International Circuit, leading the field by almost seven seconds in his Volkswagen Lamando GTS.

Huff got to grips quickly with the Lamando GTS, a Chinese-market saloon version of the Golf, powered by a 2.0 litre turbocharged engine, topping both free practice sessions before setting pole position on Saturday on his first flying lap.

In Race 1, Huff drove away from pole to an unchallenged victory, finishing 6.8 seconds ahead of the Kia of Jason Zhang, with the BAIC Senova of David Zhu in third.

The reversed grid rules in CTCC however reverse the top 12 finishers of Race 1, which put Rob down in 12th for the second ten-lap race later that afternoon.

The Briton made a good start, but when it was determined one of the Fords had started out of position, the race was red-flagged and restarted, with a number of cars experiencing technical issues due to the searing near-40 degrees Celsius heat at the circuit before the second attempt at a start.

Unfortunately, Huff’s car was one of those affected, as his Volkswagen’s power steering dropped out on the second formation lap, before suddenly kicking back into life as he came into the pits, and was able to make the start, albeit now plum last and from the end of the pit lane.

Huff then scythed through the order, going from 19th to fifth in the shortened eight-lap race, finishing in sight of the race winner, despite taking damage after an incident between team-mate Zheng Zhen Dong and the Ford Focus Andy Yan at the end of the second lap.

“The car was awesome all weekend. I did three days testing at Guangdong a month ago, which has really paid off. I think Race 1 was every racing driver’s dream, as we made a great start and then just didn’t see anyone for the entire race. I just paced it nicely and tried to feel the balance for Race 2.

“We tweaked the car a bit for Race 2 to try and dial down the understeer, as it’s so hot out here. I then made a good start and jumped three or four places, but then it was red-flagged before the end of the first lap and we had to go back to our original positions.

“On the second warm up lap, the power steering wasn’t working. I reset everything about three or four times, but nothing happened, so I said to the team we’ll have to come in, and just as I came into the pits, typically the power steering then suddenly came into action and it was fine from thereon in.

“I started from the pit lane, therefore last. I had a bit of contact with one of the Fords on the second lap. My team-mate Zheng and one of the Fords were side-by-side going into the last corner and both got caught up and couldn’t turn in. The Ford came back and hit me, and that bent my front-left a little bit, so the car wasn’t quite the same after that – and that also put the Ford out and brought out the safety car.

“To come back after that and finish fifth was great, and just over four seconds off the lead. It’s been a good, solid first weekend with some nice silverware, and I’m really looking forward to the next one in Wuhan.”