Rob Huff puts on an overtaking masterclass in Portugal

Rob Huff puts on an overtaking masterclass in Portugal 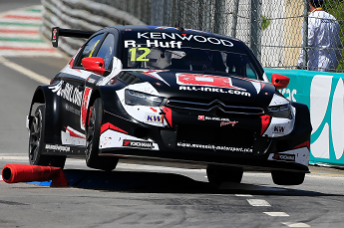 Rob Huff has hailed the main race at Vila Real as one of the best of his career, despite disaster at the start, when a clutch issue caused him to drop to absolute last from second on the grid.

Huff then carved his way through the order to finish fifth and keep his championship aspirations alive.

The ALL-INKL Münnich Motorsport driver had qualified in second on the grid after a sensational lap in the one-lap qualifying shootout, unable to go faster than the Honda of Norbert Michelisz which was carrying 30kg less weight this weekend as part of the championship’s compensation weight.

A strong run in the Opening Race from ninth to sixth in traffic on old tyres saw the Cambridge-based driver take a good haul of points in the championship chase, but the focus was all about the Main Race, with new tyres fitted to his Citroën C-Elysée WTCC, ready to challenge for the race victory against Michelisz’s Honda.

The opportunity to win disappeared fast however, as Huff bogged down at the line, dropping to the back of the field, with the focus switching to damage control in the championship, but there was no holding back the Briton at the Vila Real circuit, which had introduced a controversial “joker lap” this year because of how difficult it is to pass at the Portuguese street circuit.

The street circuit master was already back in the points positions by the end of lap three, and continued to charge through the order – making strategic use of the joker lap to pass Race 1 winner Mehdi Bennani’s identical Citroën on lap six, and then closed down on the last Citroën of Tom Chilton, putting a move on his British rival to grab fifth overall and the independents’ class win to move into the lead of the independent drivers’ classification.

“Everyone says you can’t overtake on street circuit – but I was able to pass not just cars that are slower than mine – some are the same as mine, some were perhaps faster. At the end, I’m a little disappointed as we could have had more. In Race 1, to come from ninth to finish sixth, I’m happy with that, but to go from last to fifth in Race 2, I think that was one of the best races I ever drove – if you don’t count the start.

“It’s a shame as the talk will all be about the joker lap this weekend – but I only passed three cars with the joker lap, the rest I did myself.

“At the end of today, they can’t say anymore that you can’t overtake on a street circuit!”

After Vila Real, Rob Huff heads to the “flyaway” rounds of the season, starting in Argentina in three weeks’ time, just 37 points behind championship leader Tiago Monteiro, in the closest WTCC season to-date, with 60 points available at each race weekend.

Huff has also taken the lead of the independent drivers’ classification, the “WTCC Trophy”, by four points, and also claimed the TAG Heuer award for the fastest lap of the race for the second time this year, the first driver to do so this season.