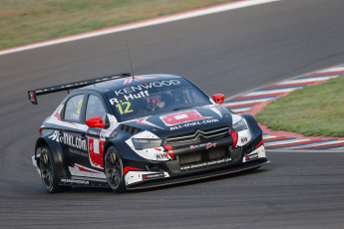 Rob Huff made the most of a problem in qualifying to score points in both of today’s races at the Termas de Río Hondo circuit, and leaves Argentina still in contention for the FIA World Touring Car Championship drivers’ title, while also retaining the lead of the independent drivers’ standings.

An issue with the braking system in free practice meant the ALL-INKL Münnich Motorsport team were forced to replace the brakes on his Citroën C-Elysée WTCC just ahead of qualifying, effectively using the first part of the session to bed them in.

That left Huff with only one shot to make the second part of qualifying, but when the new brakes locked up and flat-spotted his best set of tyres, he missed the critical Qualifying 2 cut and found himself in 13th, where he’d have to start both of Sunday’s races.

The 2012 champion made good progress in the opening race, passing five cars at the Argentinian circuit to move up to seventh in an eventful race, with a number of front runners having difficulties with tyres and race damage.

While after the passes were done, it was a quiet run to the finish in Race 1, Race 2 was a bit busier, with Huff quickly making his way past long-term competitor Tom Coronel’s Chevrolet, but then found himself stuck behind the Lada Vesta of Yann Ehrlacher (the nephew of Huff’s former team-mate and championship rival Yvan Muller) throughout the entire race, and had to settle for ninth at the finisha.

Tiago Monteiro continues to lead the drivers’ standings for Honda, but Huff is just 65 points behind, with 60 points available from a race weekend and with still four races left in the championship, although the next one doesn’t take place for another three months, at the brand-new Ningbo circuit in China.

“Our problems all stemmed from qualifying. We had a brake issue in Free Practice 2, which meant we had to start qualifying with new brakes, and the braking was completely transformed. I braked in the same place as normal on the back straight with new tyres, but it locked the front axle and flat spotted the new tyres and that was the end of that.

“In Race 1, we did OK and got up to P7, while in Race 2, we improved the car again. We’ve had a completely different set-up to what we’ve been running before, and I really like it. This is also one of the toughest tracks for this car for sure; we saw all of the Citroëns didn’t have the pace of Volvo or Honda at all this weekend – of course the 20kg weight difference will have something to do with that, as that is worth 5km/h per lap.

“However, we scored some points, while Nicky (Catsburg) DNF’d in both. Tiago (Monteiro) scored a few more points than we’d have liked him to, but the fact that Norbert Michelisz won the second race and Yann Ehrlacher won the first was a bit of a blessing. It’s a bit of a long gap until the next race, but we’re still there in the championship, and we can still do it.”