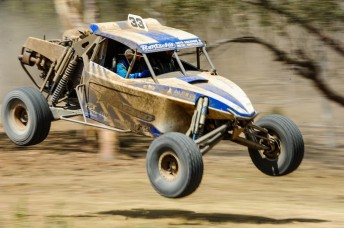 There’s double the value in a ticket to next week’s Coates Hire Rally Australia: it buys all the spectacular action of the FIA World Rally Championship plus the thrills and spills of a second event for the Australian Off Road Championship.

Coates Hire Rally Australia will host Round 10 of the WRC on 11-14 September, bringing the fastest gravel drivers on the planet to the forest and shire roads of the New South Wales Coffs Coast. Simultaneously on the weekend, off-roaders will return for a second year in the Pedders Suspension Coffs Coast 400 on a separate course just north of Coffs Harbour.

A WRC ticket from NRMAtix gives entry to both events and an unbeatable line-up of cars, drivers and pure excitement. Alternatively, separate tickets to just the off road race are available.

The short distance from the city and proximity to some rally stages make it an easy choice for spectators wanting a variety of action.

The high-powered off road buggies, pick-ups and SUVs will warm up for their event – Round 4 of their championship – with a demonstration appearance by 10 competitors on the 1.6 km Hyundai Super Special Stage at C.ex International Stadium from 3.45pm on Friday 12 September.

Off road entrants also will be on static display at the Hi-Tec Oils Service Park, next to the Super Special Stage, and from 1pm Thursday at the Coates Hire Rally Show and official start in the Coffs Harbour city mall.

Off road competition starts at 11am on Saturday morning with a 10 km qualifying prologue to determine starting order for the first of eight laps of the full course scheduled over the weekend.

Each day’s action will be preceded by a “grid walk” in the event paddock on Bucca Road, where fans will be able to walk among the cars and meet their crews.

Designated spectator points will be at the Bucca Road headquarters and on Cottage Road.

Off road racing and rallying have few similarities, except the drivers’ ability to control their vehicles at high speeds over unsurfaced terrain.

Off roaders’ long-travel suspension allows them to tackle high-speed obstacles that would stop an ordinary road car, plough through sand and mud and take huge leaps off crests. Powered mostly by V8 and turbo-charged V6 engines, these spectacular cars can reach up to 200 kmh in suitable conditions.

Rentsch will be chasing points for his seventh Australian Off Road Championship.

Tickets to Coates Hire Rally Australia are available via the NRMAtix link at www.rallyaustralia.com.au.

Coates Hire Rally Australia starts with the rally show in the Coffs Harbour mall in Harbour Drive from 1pm on Thursday. All cars will be on display and WRC drivers will sign autographs from approximately 4pm.

Full event details including spectator maps and directions, Michelin Shuttle bus times and entry lists are available on the event website. The official souvenir program is now on sale as local newsagencies