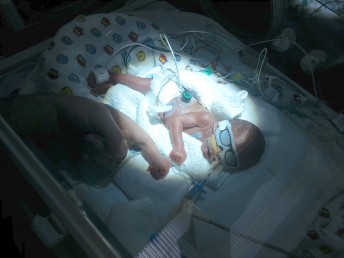 His daughter Zoe is almost three months old but in an ideal world, Brendan and his partner Kristy would be waiting another three weeks to meet their baby girl.

Zoe was diagnosed with gastrointestinal perforation (GP) after medication formed a hole all the way through her bowel, meaning the contents would be able to spill over to the abdominal cavity and cause infection.

“The doctors were concerned that if they stitched up the hole that it wouldn’t heal properly so it was safer to pull the bowel out and then wait until she was bigger to put it back in,” Brendan said.

Although GP only affects 1 in 2,000 to 4,000 births, or between 1% and 5% of neonatal intensive care unit admissions, it is the most common and serious gastrointestinal disorder among hospitalized preterm babies.

“She is still recovering from the second operation and has had a nurse looking after her 24 hours a day since she was born, there have sometimes been up to nine doctors in the room,” Brendan said.

Now a long-term resident of the ward, Zoe is called “grandma”, although with constant care and a ventilator helping her to breathe, she should be home in a few weeks.

“All we want is a cordless baby,” Brendan laughs, “The amount of cords, drips and sensors hanging off her makes the V8 Supercar telemetry look primitive.”

With up to 650 babies like Zoe admitted to the Butterfly Ward each year, Repair Management Australia Racing are urging everyone to dig deep this Easter for the Hospital’s Good Friday Appeal.

“You don’t appreciate how good our health care system is until you have to lean on it, the doctors and nurses at the Royal Children’s have been phenomenal and we can’t thank them enough for their expertise and support,” Brendan said.

“You don’t realize all the support networks for families that are available, including the Ronald McDonald House who have put us up for the last three months so we can be close to Zoe.”

Driver of the #23 Commodore, Russell Ingall is the proud father to Sasha and Jaz and knows just how important your family’s health is.

“Over the last few months seeing what my engineer Brendan has had to juggle with the race team and also a new born that has been doing it tough, the incredible thing I’ve seen is the fantastic work that the doctors and nurses have been doing for Zoe and making lives for parents in similar situations a hell of a lot easier,” Ingall said.

“Definitely some of the events that have been happening over the last week are absolutely trivial compared to what Brendan and his wife have had to endure.”

The Royal Children’s Hospital’s Good Friday Appeal is this Friday and will be broadcast live across Victoria on Channel 7.

Donations to the Appeal are for the benefit of the Hospital and raise much needed funds for equipment, research and education to support the work of The Royal Children’s Hospital.