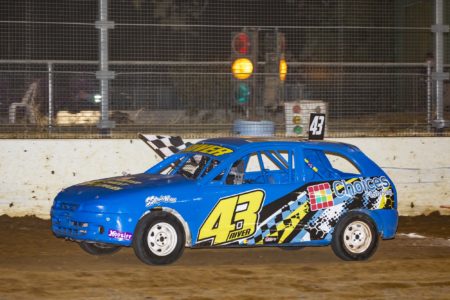 After less than 12 months in the Junior Sedan ranks, River Spitzbarth has certainly made an impression.

At the age of only 10 and with only a dozen race meetings in a Junior Sedan to his name, River has quickly developed into a front-running contender.

Based in the Northern Territory capital of Darwin, River and his family aren’t afraid to travel in order to get more track time, and it has seen them compete at their home track of Northline Speedway, along with Katherine Speedway, Tennant Creek Speedway and Arunga Park Speedway (Alice Springs).

Since he was old enough to speak, River has been obsessed with the speedway and it’s been helped along by the sport being in his blood with his dad, Simon, being a former Street Stock and Sprintcar competitor, and his mum, Mary-K, competing in Junior Solos as a youngster. River got his first taste of speedway competition via the Dirt Kart class at the age of eight, when he first learned his racing craft and his highlight was winning the 2020 Darwin Club Championship in the Junior Lites category.

After his time in Dirt Karts, River, at the age of 10, turned his attention to Junior Sedans. Towards the end of last year, he made his speedway debut at Northline Speedway aboard a Daihatsu Charade. From the outset, he showed plenty of promise and it saw him quickly move his way towards the pointy-end of the field.

Recently, River moved out of his Daihatsu Charade and into a Mitsubishi Mirage that was built by his dad, and it has seen his racing go to another level and he has so far collected two feature-race wins from as many starts.

Looking ahead to the future, River is aiming to continue to develop as a racer, and for next season, he is going to travel interstate and compete in the 2021-22 season Western Australian Title, amongst other blue-ribbon events. The long-term goal for River is to work his way towards making it as a full-time competitor in motorsport.

Apart from his family’s help, River receives a lot of support from current Supercar racer Chris Pither in terms of advice with his racing and the setup of the car, as well as newly-crowned Northern Territory Street Stock Champion Justin Brumfield. The support he receives from everyone is very much appreciated by River and his family.