A promising Riverina motorsport talent has confirmed his plans for 2020, linking with a championship-winning team for his first foray into car racing. 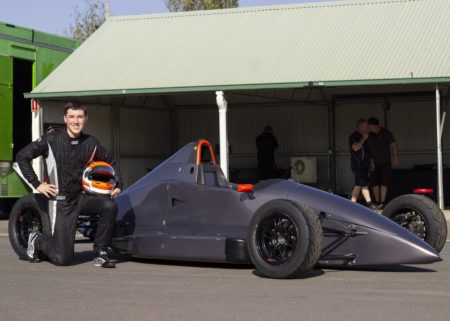 After achieving outstanding results in go-karts over the last few seasons,15-year-old Noah Sands – based in Leeton – will make the progression to the Australian Formula Ford Championship.

The national Formula Ford series is contested over seven rounds throughout New South Wales, Queensland, Victoria and South Australia. The category – now into its 51st season – is recognised as the primary breeding ground for aspiring professional racing drivers, with its past champions including Supercars stars such as Craig Lowndes, Jamie Whincup, Garth Tander, Chaz Mostert and Anton De Pasquale.

Another Formula Ford champion, Mark Larkham, also hailed from the Riverina district, growing up in Griffith. Larkham enjoyed a successful career as a Supercars driver – including a pole position at the Bathurst 1000 – and is much admired by Sands.

“Everyone in Griffith and Leeton still talks about how good Mark was as a driver, and I’d love to follow in his footsteps,” Sands said.

For his rookie season in Formula Ford, Sands has linked with the Canberra-based CHE Racing outfit, which won the most rounds of any team last season. Sands will drive the Mygale Formula Ford campaigned by Lachlan Mineeff over the last three years, and has already been testing in preparation for the start of the championship.

“I’ve driven the car around the Wakefield Park circuit in Goulburn – there’s a lot to learn and think about compared to a go-kart, but I’m getting used to it,” Sands said.

“The biggest difference is the brake and throttle application – you’re applying much more brake pressure, and coming out of corners you’re needing to be patient on the throttle.”

Sands is being guided in his progression to Formula Ford racing by CHE Racing team manager Cameron Hill, who won the Formula Ford title in 2015.

“Cameron has a huge amount of knowledge and experience, and he’s really good at encouraging me to get the best out of myself,” Sands said.

“I’m also fortunate to have a fast team-mate in Tom Sargent, who won Formula Ford races last year. I’m able to compare my data to his, which is helping me learn very quickly.”