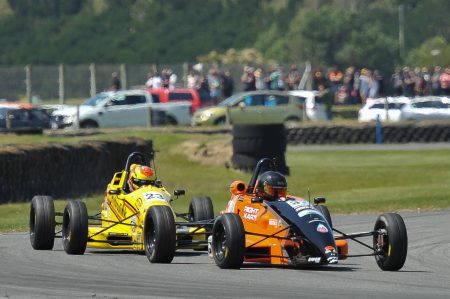 Joining the field are two international drivers, Kyle Gurton (ex-Michael Collins VD RF91) from Australia and Luke Kohlbecker (ex-Bethune Mygale SJ2007) from the USA. Kohlbecker begins his 2019 campaign after a successful run in the 2018 Canadian F1600 Toyo Tires Championship where he finished on the podium in both the Ontario series and the Ontario/Quebec Super Series.

This season is lining up to one of the most competitive with several drivers knocking on the door of either a podium finish or race wins. This includes Ben Stiles (VD Stealth) from the UK, Zac Stichbury (Mygale SJ08a) from Napier and Christchurch’s Jack Noble-Adams (VD Stealth) and Bailey Paterson (VD Stealth). Joining the field for the first time this season is Auckland’s Kurt Peterson (Stealth) who finished third overall last season.

Bethune has won two of the three national championship races so far as well as finishing third. The other race win going to Michels. Penrose, with three second places is the leading rookie.

With three Class titles also being competed for, Bethune leads Class 1 from Michels and Stichbury while Penrose leads Stiles and Ethan Anderson in Class 2. Noel Atley (Crossle 55F) continues to lead Class 3 from Gary Love (VDRF88) and Roger McKenzie (Begg FM3). Drivers’ face qualifying and three races over the weekend before heading to Teretonga Park in Invercargill for the third round next weekend.