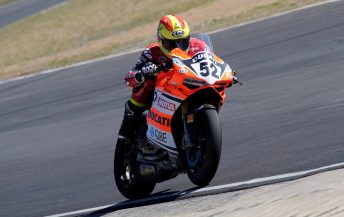 Superbike Rookie Corey Turner has caused quite a stir with his impressive debut for the Desmosport Ducati Team, at the Official Yamaha Motor Finance Australian Superbike Championship presented by Motul Pirelli Test at Morgan Park Raceway (6-9 August). 19-year-old Turner on the 1299 Panigale managed to post the fourth fastest time, making the paddock sit up and notice. With three-time World Superbike Champion Troy Bayliss and Team Manger Ben Henry in his corner, it will be fascinating to see how Turner fares at his home race, Round 5 Morgan Park Raceway (August 25-27).

Rookie Yamaha Motorcycle Insurance (YMI) Superbike rider Turner, has replaced the injured Callum Spriggs for the remainder of the 2017 season.

We caught up with the Queenslander Turner to discuss his his transition to the Desmosport Ducati team in the ASBK.

What brought about the move to Desmosport Ducati for the remainder of the season?

“I was competing at Morgan Park Raceway for a local event and Callum (Spriggs) was out there riding on the Desmosport Ducati as well. I went out there on my Yamaha YZF-R1 and rode on the Saturday. On Sunday morning I had a chat with Henry. He told me that Callum’s shoulder was still giving him troubles from the last round of ASBK at Darwin, and he asked if I was interested in having a ride on the Ducati. Of course, I was not going to turn that opportunity down.

“That day, I had a ride on the Ducati and adapted fairly quickly. Callum had surgery and announced that he was out for the remainder of the year. That’s how it all began and I’m very grateful for the opportunity Desmosport Ducati have provided me,” smiled Turner.

You’ve obviously caught the attention of Ben Henry and Troy Bayliss with your results, why do you think they selected you?

“Achieving that fourth place in Darwin really went a long way to helping secure the ride. On the other hand, there aren’t too many riders that can swap mid-way through the season to different team. Being top rookie in my first season of ASBK and being a privateer, were all contributing factors.

“This is what all the privateers race for, in the hope that one day they can secure a ride with an established team. It definitely is a dream come true; especially to have a figure like Bayliss in my corner, is quite surreal.”

How was the early transition into the ASBK Championship?

“I have plenty of experience racing internationally, so I believe it was only a matter of time before I adapted to ASBK. “We were running a fairly standard Yamaha YZF-R1 at the beginning of the season and I would have to save up money here and there for parts. As the season went on, the results started to improve.”

You mentioned you have plenty of international experience, please fill us in on where you have competed previously?

“I went overseas back in 2013, when I was 15-years-old. I raced in the Spanish Moto3 Championship over in Spain. One thing led to another and I competed in the Moto2 European Championship and stayed there for two years. It was quite a trying time as my dad and I had to live race by race, as everyone knows competing in Europe can be extremely expensive.

“I competed in the Japanese Superbikes last year, I competed in four rounds over there and the Suzuka 8 Hour. Eventually, it become time for us to come back to Australia. When I arrived home, dad surprised me and bought a Yamaha YZF-R1, put race fairings for it and that’s how I ended up at Round 1 of the ASBK.

“I’m very glad that we made the decision to compete in the ASBK. After racing overseas, it was looking like my racing days were becoming numbered. Luckily my dad purchased the bike and and said let’s go racing in the ASBK.”

You’ve risked it all to chase your motorcycle dreams, is the ride with Desmosport a payoff for all the work you’ve put in?

“For sure, it’s a weight off not only my own shoulders, but my family’s as well. This is what we’ve all been working for. Riding with a team has come earlier than I would have thought, but we’re ready to put the work in for the final three rounds.”

What are your impressions of the Ducati first up, its probably the most unique bike on the grid, does it require a different riding style compared to the Yamaha?

“From what I’ve heard from Bayliss himself, is that you have to ride the Ducati with a ‘European Style’ with plenty of corner speed, in caparison to the Japanese inline-four bikes which are more stop, stand it up and go. In my opinion, the bike suits my style and its great to gel with the package quickly. The 1299 Panigale can be considered a more ‘aggressive’ bike to ride, but that seems to work well with my style so far.”

Did Bayliss take a lot of interest in how you were going in the test? What is he like to work with?

“Absolutely, Bayliss was always on hand for advice during the Official ASBK Test at Morgan Park Raceway. Of course, Bayliss has a wealth of racing knowledge and experience. If we have any issues whatsoever, he always knows what adjustments are necessary. I’m looking forward to working with him in the future.”

What are the expectations for Round 5 at Morgan Park, can you maintain the sort of speed you were showing at the Official ASBK Test?

“Honestly, I think I surprised myself with my pace at the Official ASBK Test. The team don’t really have any set goals or expectations of me, so that helps to alleviate a lot of the pressure. We will push as hard as we can and aim for solid results.”

Many have classified you as an underdog taking on the established riders. Do you think it shows that privateers can make an impact in the championship?

“It’s great for the championship that privateers can come in and make an impact within ASBK. Obviously recent years have seen riders such as Troy Herfoss, Wayne Maxwell and Glenn Allerton dominate and it’s exciting when you have fresh faces competing towards the front. It definitely motivates me to push as hard as I can and see what results are possible.”

Round 5 of the ASBK will take place at Morgan Park Raceway 25-27 August.