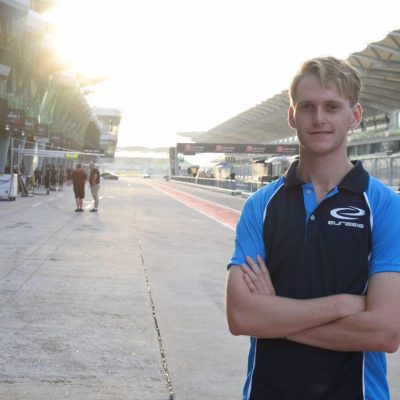 Speaking about what attracted him to the highly competitive feeder series to Asian Formula 3, Hill explained. “This is another big step up in vehicle size and performance for me and the series has produced some world class drivers over recent years. So, it’s a fantastic opportunity for me to test myself against the best junior drivers in the world on some top-class tracks, including the Sepang and Shanghai F1 circuits.”

The hard charging 21-year-old is thrilled to be reuniting with the highly experienced and successful Eurasia team, having driven for them in Formula Masters Asia last year.

“I’m really happy to be back with the Eurasia team, as they’re a very professional, well run team, and we believe they’re the best team in Asia to be with. That comes right from the top with Mark Goddard. He has a long history in motorsport and knows how to create a winning team, so I’m very excited for the season ahead.”

Eurasia team principal Goddard has been equally impressed by Hill’s progress with the team.

“Kurt was probably the least experienced driver on the grid last year in Formula Masters and by season’s end he had improved to become a constant top six runner. He was impressive in testing with the Formula Renault last month and he knows Zhuhai well having raced there twice. We are confident he will be competitive,” he added.

Former speed-skater Hill has enjoyed testing the AFR chassis, finding it similar to cars he’s driven previously but feeling that the handling suits his driving style more. As a result, the youngster is looking forward to another strong season in his short, but impressive motorsport career to date.

Having raced on the 4.319km/2.684m Zhuhai International Circuit in Guangdong province before, Hill is also keen to perfect his driving technique on the challenging 14 turn track.

“Zhuhai is everything I like in a racing circuit. When you look at the layout, it doesn’t appear to be a difficult track, but it rewards precise driving and any mistakes are punished quite harshly. It’s an easy circuit to be fast on, but it’s not an easy one to be very fast.”

Rather than enjoying the few months downtime during the off season, the Sydney born racer continued pushing his learning curve, competing in the MRF Challenge winter series. An experience he now believes will help him moving forward into AFR.

“I think the MRF challenge will really benefit me, as it feels like I’ve never really got out of a race car since the start of last season. It all helps continue the momentum and my growth and progression as a driver. I’m really looking forward to honing my racing skills and race craft, from lights to flags, this season. I made some good progress last year, so I’m ready to take that up a notch and be fighting at the front.”