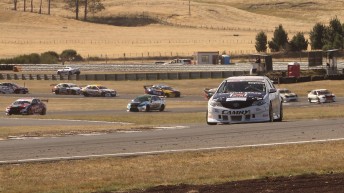 This weekend at Pukekohe Park Raceway will see the completion of the NZV8 Touring cars 2013-14 season, a season which has gone very well indeed and attracted much interest as the series sets to grow.

As well as the excitement of the final round which will be strongly contested over four races at the weekend, chairman of the NZV8 Touring Cars Ian Booth reflects on the success of the season and the rising interest in the category.

“As chairman of the class I am very very pleased by how the season has run, everyone’s very positive and having fun which is what the class is all about.” said Mr Booth.

“And we are looking good going into the new season with new cars, new entrants, new interest and new enthusiasm. The good thing about this class is everybody is having fun and we continue to gain interest in the TLX class.” he said.

With a well run season starting at Pukekohe Park Raceway in November followed by Teretonga Park, Timaru International Motor Raceway, Manfeild Autocourse, Taupo Motorsport Park and then of course the return to Pukekohe this weekend, the series has hosted some excellent racing in both the TL and TLX classes thereby attracting more and more interest.

With both classes growing and the addition of a new brand into the TLX championship for next season the future of the NZV8 Touring Cars is looking very strong indeed.

“There is just so much interest out there at the moment and especially after Nick Ross’ Nissan Altima press release which has a lot of people talking. And there are new people entered into the TL class for the new season as well.” said Mr Booth.

With the ability to enter various brands into the series using their own V8 powerplants the TLX class has attracted interests from manufacturers other than the current Holden, Ford, Toyota and Nissan.

“There is a point of interest in that we have the same DNA as the V8 Supercars which is encouraging other brands to come in. With the engine sourced from the manufacturer it gives them more interest in our class.” said Mr Booth.

“The quality of the makes and models in the TLX is there and it’s a very good field. It’s very good for young drivers in the TL class this season to see that is the future of the series. The likes of James McLaughlin and Brock Cooley are good examples and I believe they will be in TLX cars in a year or two.” he said.

This weekend at the V8 Supercars meeting, the NZV8 Touring Cars contest four races with a whopping 300 points up for grabs leaving the title challenges wide open.

Both classes have been hotly contested from round one and as the teams arrive at the circuit south of Auckland for the final there are yet no clear winners.

Australian driver Jason Bargwanna and Cambridge’s Nick Ross have not only swapped the lead in races throughout the entire season but the lead in the championship.

With Ross holding the lead while in the South Island, heading to the final it’s Toyota Camry driver Bargwanna with a lead of 1026 over Ross in his Holden Commodore on 957.

The relatively small gap will no doubt bring more exciting racing between the two which has continued relentlessly through the entire season.

With four 16 lap races to be run this weekend anything can happen and no matter how unlikely, Hamilton’s Lance hughes could still take out the championship from third place with his 827 points .

James McLaughlin from Lower Hutt has all but dominated the season winning three of the five rounds in the NZV8 Touring Cars TL Championship and is currently ahead of Hamilton’s Ian Booth.

Both drivers are in Holden Commodores and it was only at the last round in Taupo that McLaughlin pulled the lead back from Booth and holds a slim margin of 809 to 798 points going to Pukekohe.

As in the TL category with four races this weekend and a 300 points potential that 11 points has little meaning in the scheme of things.

Coming up behind the two is Turua’s Brad Lauder driving a Ford Falcon who has shown good speed through the season and has every chance of winning the title himself from his standing of 738 points.

The sixth and final round of the NZV8 Touring Cars get underway at Pukekohe Park Raceway today with a testing session at 1.15pm followed by qualifying on tomorrow at 4.55pm.

Overall there will be four 16 lap races this weekend, with two on Saturday at 9.55am and 1.05pm followed by what promises to be an exciting final two races on Sunday to complete what has been a very intense season. Those final races are at 11.15am and 1.30pm.