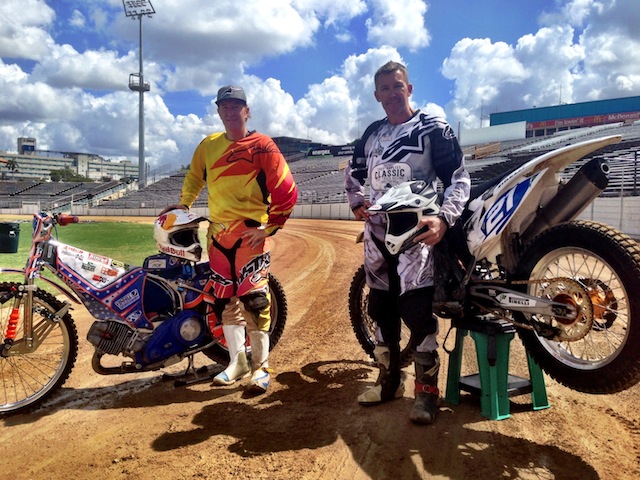 The rider line-up for the MOTO EXPO Baylisstic Scramble presented by InsureMyRide and Motul was announced today, with some of Australia’s best road, dirt track, speedway and motocross racers confirmed to contest the event at Melbourne Showgrounds on November 28-30.

The Baylisstic Scramble teams dirt track feature event will be contested on the Melbourne Showground’s main arena at midday on Saturday November 27 and Sunday November 28. The event is included in the general entry ticket and is open to all ages.

Event Organiser and Team Captain Troy Bayliss said he was excited to be bringing this group of racers together for MOTO EXPO Melbourne.

“We have an incredible line-up of some of Australia’s most successful racers coming to Melbourne to contest the Motul Pirelli Baylisstic Scramble,” Bayliss explained.

“Paul Caslick’s team will be hard to beat given that they raced together and won the event in Brisbane.

“To get these racers together in one place is extremely rare. It doesn’t matter what category of racing you follow this really is an event not to be missed.

Over 20,000 motorcycle enthusiasts are expected to attend MOTO EXPO Melbourne over the three-days of the event. Entry into the show also includes access to the Australian Motor Finance Head-2-Head EnduroCross.

Visitors can expect to see some of Australia’s most successful motorcycle athletes along with entertainment including live street bike stunts, ATV, side by sides (UTV), mini moto, Freestyle Moto X, Trials and more.

FREE undercover motorcycle parking will be available within the showground’s for all visitors.

Tickets to MOTO EXPO Melbourne are on sale now via www.motoexpo.com.au