Shamrock Motorsport driver Richie Dalton’s quest for a hat-trick of Rally of the Bay victories ended in disappointment on Saturday, despite showing early pace. 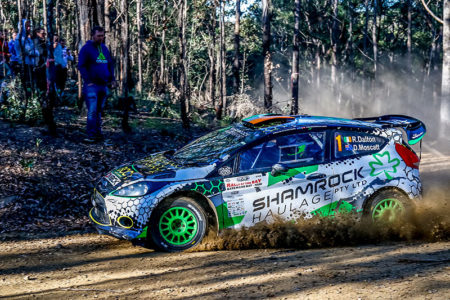 Dalton and co-driver Dale Moscatt had won the Batemans Bay based rally for the past two years, and after a long break due to COVID-19, they were eager for more success at one of their favourite events.

A successful test session prior to rally had their Ford Fiesta running sweetly, and they carried that confidence into the first two stages on Saturday morning.

After two stages, Dalton was lying in a comfortable second place, only trailing the factory Toyota Yaris of Australian Rally Champion Harry Bates, who was shaking down his car ahead of the national series commencement.

On a slippery, dry corner on stage three however, Dalton slid wide and hit a tree with the front of the Fiesta.

“We are both okay, but it was a very rookie driver error,” Dalton lamented.

“I put the car a little too much off the swept line to make a better angle for the corner, which in turn failed to make the car turn in.

“The line is so fine when travelling at these speeds and fighting for half seconds here and there.

“We are extremely disappointed as we were in a comfortable position for a podium.”

It meant that Dalton and Moscatt were spectators for the rest of the seven stage rally, which eventually finished with a 1-2 result for the Toyota team.

The Fiesta will now be repaired ready for its next outing, although when that will be remains a bit of an unknown because of the re-emergence of the Coronavirus pandemic.

“We will be back,” Dalton added, “but at this stage we’re not sure exactly when.”