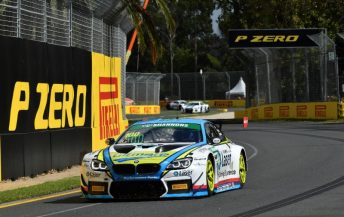 “Racing in New Zealand and at Hampton Downs is like coming home for me,” says Richards.

The name Richards is synonymous with New Zealand motorsport. Jim Richards is a seven-time winner of the Bathurst 1000 and Steven has four wins to his name. Steven was born in Auckland but moved to Australia when he was three-years-old.

“My father Jim moved across to Australia for his motor racing career and we’ve been in Australia ever since,” says Richards. “But I have a New Zealand passport and I get back to New Zealand a couple of times a year. New Zealand is still very much a part of my DNA.”

The Hampton Downs 500 doubles as the penultimate round of the Australian GT Championship’s endurance series and will feature some of the finest GT production cars in the world including Lamborghinis, Ferraris, Aston Martins, BMWs and McLarens. With over $22 million worth of cars on the circuit it promises to be the motor racing event of the year.

Two weeks later, the travelling roadshow heads south to Highlands Motorsport Park in Cromwell for the final round of the Australian GT Championship, the Highlands 501. New Zealand drivers in both races, the Hampton Downs 500 and Highlands 501, will be eligible for the inaugural NZ 1001 trophy which will be awarded to the Kiwi driver with the most combined points from the two events.

“We’ve had an up and down season so far but we’re looking forward to closing out the season in New Zealand with two fantastic races and hopefully a couple of good results,” says Richards.

This year’s race is extra special for Richards. Laser Plumbing & Electrical have sponsored him since 2011 and they’re also the new naming rights sponsor for the Hampton Downs 500.

“Laser got involved mainly off the back of last year’s race at Hampton Downs,” says Richards. “They saw real value in the event, the venue, the track and the TV coverage. They’re really excited about being involved and what it means for their brand. Laser originally started in New Zealand before they exported their franchise model to Australia so you’ve got two homegrown New Zealanders coming back together for what should be a great event.”

Richards raced at Hampton Downs in 2012 in the inaugural season of the NZ V8 Supertourers Championship but he was blown away by the changes to the place for last year’s inaugural visit of the Australian GT Championship to the Waikato motorsport park.

“From a driver’s perspective, the track has been transformed,” he says. “There are some great fast corners around the back. The back straight is a lot longer and leads into a very tight corner which creates good overtaking opportunities.”

“Since Tony Quinn took over the circuit, not only has he improved the track, he’s also developed an incredible hospitality suite above pitlane and given the place a real shake up. Last year’s Hampton Downs 101 was a fantastic event and the Laser franchise members really enjoyed their experience. I know everyone at Laser is looking forward to taking it to a whole new level in 2017.”

It promises to be a whole new level on the track as well with changes to the format from last year’s Hampton Downs 101. Instead of racing 101 laps or just under 400 kilometres, the GT drivers will battle it out over 500 kilometres. That means there will be a third pitstop and two driver changes which will mean a change in strategy for the teams. It will also have implications for tyres and fuel strategies making the Hampton Downs 500 a true endurance test.

“It will put the drivers and teams under considerably more pressure and where there’s pressure you get mistakes so it will make for exciting racing,” says Richards. “The circuit is very busy. You don’t get much of a break driving these cars. Last year at Hampton Down was a fantastic race and I’m really looking forward to having another crack at it.”