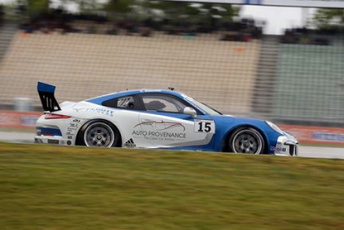 MEDIA RELEASE: Porsche Supercup – Following his debut in the Porsche Carrera Cup Germany in Hockenheim last weekend, Spike Goddard is looking forward to kicking off the season for the Porsche Mobil 1 Supercup in Barcelona this weekend.

The Australian is competing for Molitor Racing Systems in the #15 Porsche 911 GT3 Cup in the 2015 season with teammate Christian Engelhart.

The season opener for the German Porsche Cup at Hockenheim saw a decent
start for Spike Goddard with two finishes in the midfield.

“I think I had a mixed result in my first ever Porsche Carrera Cup race weekend in Europe,” said the 22-year-old, who is new to GT racing following a couple of years in
the FIA European Formula 3 championship.

“I was disappointed with my qualifying which made my race weekend more difficult. My starts were ok and importantly I managed to stay out of trouble on the first lap.

“A big positive is that I finished both races and brought the car home in one
piece.

“Everyone on the team has been extremely helpful and I really enjoy
driving the Porsche. I am on a steep learning curve and I am confident that
I will continue to improve throughout the season as the car handles quite
different to a Formula 3 car.”

Spike´s career started in the Australian Formula Ford Championship and then
graduated to the very competitive FIA European Formula 3 Series, in which he
raced during the past two years.

He also showed his talent and speed at the Formula 1 official test at Abu Dhabi late last year, where he set very good lap times for the Sahara Force India team.

The transition from Single-Seaters to Sports-car racing is a totally new
experience.

Spike first got a taste of sports cars during the Australian Grand Prix in Melbourne in March.

“My first weekend in a Porsche was like an extended test session in preparation for both the Porsche Carrera Cup and Supercup”, said the young Australian.

“Both of these European championships are very tough, the racing is close and there are some great drivers on the grid! If you do a great job in these series, you have the opportunity to graduate into DTM or LMP1.”

The Porsche Mobil 1 Supercup is the flagship series of Porsche’s 20 one-make
cups worldwide. It has run as a support category to the Formula 1 since 1993
and has flourished in this exceptional platform.

Whilst the aerodynamics with a wider rear-wing is adapted for racing, the 460 hp 3.8-litre boxer engine is similar to the production unit.

These are truly driver’s championships as all of the race cars on the grid are technically identical, as are the Michelin tyres and the fuel.

“I have only ever tested at the track in Barcelona and I am really keen to
finally race there,” says Spike.

“I am hoping to do a great job for the team and myself, because I like the track with its fast corners and flowing
layout.”