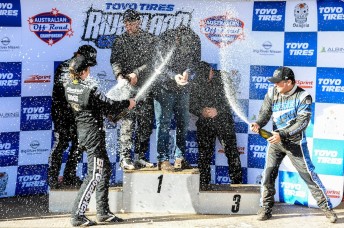 The South Australian Riverland welcomed back the Australian Off Road Championship for the first time in 22 years on the weekend, with the Toyo Tires Riverland Enduro being held at Waikerie.

The five lap race through the fast flowing paddocks and mallee scrub was dominated by Jack Rhodes and David Pullino in the #91 Jimco, who took victory in an overall time of 3:23.57.78.

Despite securing pole position during Saturdays prologue and top ten shoot out it wasn’t all plain sailing for Rhodes, with a shower of rocks in the early Sunday morning tussle with the #13 BF Goodrich Tires OBR Jimco of Travis Robinson resulting in a broken finger for the driver.

However with electrical issues forcing the retirement of Robinson on lap one, Rhodes and Pulino quickly charged and put their stamp on the event to take their maiden AORC victory.

“The last few years we have got close and it is nice to have finally cracked it at home, with everyone here,” said Rhodes.

“It has taken a long time to get where we are.”

While Rhodes led from the front, Shannon and Ian Rentsch were forced to dig deep to earn their second outright placing in the #1 Hogs Breath BF Goodrich Tires Jimco.

Seeded 15th, after failing to finish the prologue with an engine miss, Rentsch quickly worked his way into striking distance of the podium, then pounced when Hanson and Schiller fell by the wayside in

the closing stages of the race to finish 5min 8 sec behind Rhodes.

“It was a great track, especially when it dried out after the rain this morning. It would be one of the quickest I’ve raced on, similar to Griffith and Mildura.”

“It was fast and slippery, but we were motoring. We went and ran our own race, and we ran a smart race. We didn’t get tied up in trying to race anyone early on and it pulled through for us. We just kept consistent and kept lapping the truck and it didn’t miss a beat.” Said Gallard

Gallard was the first of an Extreme 2WD trophy truck trio, with Greg Gartner and Jamie Jennings in the #403 Ford F150 locking in fourth outright, ahead of Beau Robinson and Ken Skinner in the #402 Tonka Trophy Truck in fifth.

North Queenslands Michael Marson and Steve Gates thrived on the power the Ford V8 in the rear of their #32 Marks 4WD Adaptors Racer delivered, finishing 6th outright, ahead of Hayden Bentley’s #2 single seater Racer in seventh.

“We were topped out half a dozen times which was great fun, but the best thing was coming down the straights and hauling in the twin turbo V6’s” said Marson at the finish line.

Fresh from a frantic rebuild after their roll over at Finke four weeks ago, Tony Fehlhaber and Garry Howell were back to their best in the Riverland, taking their #138 Karcher Chenowth to the Prolite Class victory and eighth outright.
The Queenslanders took a conservative approach in the slippery conditions at the start of the day, before they opened the taps on the naturally aspirated 3500cc V6 and asserted their authority on the class as the sun started to shine.

Jeff and Jai Loader were the pace setters amongst the Performance 2wd’s during the South Australian Championship component of the race, held over the first four laps.

Throwing caution to the wind and taking on the Trophy Trucks in bragging rights for the longest leap on the famous road jump.

But it was Paul Youman and Mitch Marsden who took the AORC Performance 2wd honours over the full 5 lap race in the #502 V8 powered Hilux.

Punching out four laps to take the Super 1650 Class win, ahead of a rock solid South Australian based field were the NSW based team of Chris Browning and Chris Clark in the #202 Lothringer.

The Chapman Offroad Team showed true fighting spirit to get their #871 Triton to the finish line after Clayton Chapman and Adam McGuire rolled the red truck on the first corner on Sunday morning.

The team kicked out the broken windscreen, removed the broken panels, put on some goggles and got straight down to business, completing three laps.

An effort that was rewarded with the Extreme 4WD Class win and a haul of valuable AORC points.

The Australian Off Road Championship now heads north to Coffs Harbour for the fourth round of the season, the Pedders Suspension Coffs Coast 400 on 12-14 September.