The Shell V-Power Racing Team and Rheem, Australia’s leading hot water manufacturer, have agreed to continue their partnership for a third-consecutive season in 2019. 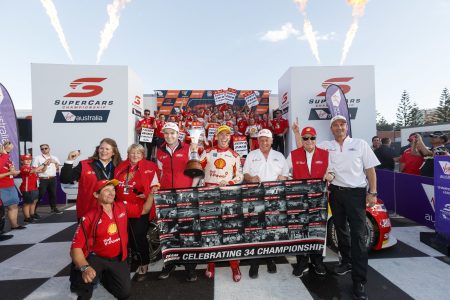 The instantly recognisable red-and-white Rheem logo will continue to appear on the new Shell V-Power Racing Team Ford Mustangs for the duration of the 2019 Virgin Australia Supercars Championship.

“We’ve had a sensational relationship with the Shell V-Power Racing Team over the past two years, sharing an incredible amount of success with them,” said Rheem Australia Chief Executive, Chris Taylor.

“Being able to experience the joys of winning the Teams’ title in 2017, and now a Drivers’ Championship in 2018, has been fantastic.

“Our customers and staff have been exposed to the program in a variety of ways, receiving money can’t buy experiences and behind the scenes access that has seen us integrate with our other marketing programs to really maximise the partnership. We can’t wait to be on board those new Mustangs in 2019.”

“Partnerships like the one we have with Rheem are not easy to cultivate, and even harder to maintain,” said Story.

“We have worked extremely hard across all aspects of our business since our inception as DJR Team Penske in 2015, and continuing partnerships like this shows that being involved with the Shell V-Power Racing Team is a valuable proposition.”

“We’re very proud that brands like Rheem have stuck with us, and shown the confidence in us to continue with us into what we hope is a massively successful future.”

Rheem has been manufacturing in Australia since 1937 and is the largest producer of water heaters in Australia. Its brands include Rheem, Solahart, Vulcan, Aquamax, Raypak and Everhot. It employs people throughout Australia and has manufacturing facilities in NSW and Victoria. It has additional subsidiary organisations in New Zealand, China, Vietnam and Singapore.

DJR Team Penske is one of the most successful motorsports teams in Australia, with eight Australian Touring Car / Supercars Championships and three Bathurst 1000 victories, competing in 2018 as the Shell V-Power Racing Team. Team Penske’s U.S. motorsports entities are among the most successful teams in the history of professional sports. Competing in a variety of disciplines, including NASCAR and INDYCAR, the team has produced more than 500 major race wins, over 570 pole positions and 34 National Championships across open-wheel, stock car and sports car racing competition. In its storied history, the team has also earned 17 Indianapolis 500 victories, two Daytona 500 Championships, a Formula 1 win and overall victories in the 24 Hours of Daytona and the 12 Hours of Sebring.