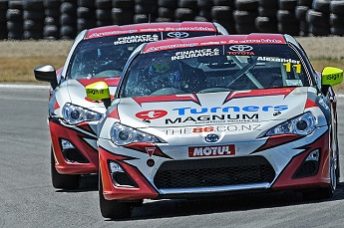 Alexander, of Bombay in south Auckland, will drive Kenny Smith’s #11 car in the six-round, 18 race championship. He faces stiff opposition from other experienced one-make racers and from two Australian drivers.

2017 rookie of the year Jack Milligan (Christchurch) is back, this year as the senior driver in the two-car CareVets team and facing an Australian challenge. Milligan scored a podium finish in his Australian Toyota Racing Series debut, competing at Bathurst as part of an ongoing relationship between the Australian and New Zealand championships.

Two Australian racers are crossing the Tasman to contest the opening round of the New Zealand Championship: Bathurst local and race winner Dylan Gulson and Cameron Hill of Canberra, who is currently second overall in the Australian series.

Milligan says he is undaunted by the prospect of going wheel to wheel with Gulson and Hill just a month after they met on-track at Mount Panorama.

“The Australian cars are a different specification to ours, and Panorama is unlike anything I have ever driven before. Scoring a podium there in my first Aussie outing was fantastic. Now these guys have the tables turned – I’m back in the CareVets car on a circuit I know and really like racing on,” he said.

Reid Harker of Albany is making a one-off return to the Toyota 86 Championship for the first round at the ITM Super Sprint, November 3-5. Harker, 22, finished second in the most recent championship and says he enjoys the challenge of Pukekohe, which he describes as a ‘hustle circuit’.

“If you’re not always right on the line, hitting your braking points, and balancing the amount of kerb you use, you’re not in the hunt,” he said.

The secret to a fast lap? Getting the best launch out of the hairpin and carrying all possible speed over the top of the ‘mountain’ onto the front straight.

“Getting the kerbs right is crucial too – not enough kerb and the lap time is down; too much risks damage to the suspension or underside of the car.”

The 2017-2018 Toyota 86 Championship kicks off Toyota Racing New Zealand’s summer of premier motor racing action this weekend. The championship is open to purpose-built TR 86 racing versions of Toyota’s acclaimed sports coupe. There are two races for the championship on Saturday 4 November at 10.45 am and 3.00 pm; the final race of the weekend is at 1.20 pm on Sunday 5 November.