Rescheduled Round Two for this Saturday night

Rescheduled Round Two for this Saturday night 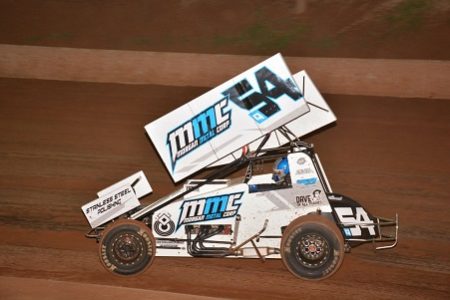 There are not many too many racing divisions that could secure more than 20 cars for a race meeting with just a few days notice, but that is exactly how things panned out when track promoter John Kelly announced that the washed out round two of the East Coast Logistics Sprintcar Track Championship would be conducted at Ausdeck Patios Archerfield Speedway this Saturday night (December 1). Yes, that’s right, Sprintcars are on the program this weekend with a strong field of drivers locked in for the event, including Queensland champ Michael Gee and defending track champion Andrew Scheuerle.

Also featuring on another jam-packed program are Dirt Modifieds, Formula 500s, Lightning Sprints, Late Models, Microsprints and Open Sedans, with over 100 competitors nominated to compete on the night.

Scheuerle brings some very good form into the clash, having finished second in the previous round of the East Coast Logistics Track Championship, while Brett Kratzmann must also fancy his chances after finishing third behind Scheuerle on that occasion, with both drivers having now finished on the podium twice in the four completed rounds. However, the most consistent driver thus far in the 2018/2019 championship has been Toowoomba’s Peter Lack. Last Saturday night, Lack somehow emerged unscathed from an altercation with Gee in which he seemed certain to roll, recovering superbly to maintain his tremendous record of finishing inside the top five at every round thus far this season, the only driver to do so. Gee unfortunately incurred a flat tyre that slowed his progress somewhat, leaving him eighth at the flag and he will be determined to put the disappointment behind him and fight his way back onto the podium.

Others who performed strongly last weekend and are backing up again this Saturday include Allan Woods, Brock Dean and teenage gun Randy Morgan. Woods and Dean were fourth and seventh respectively while, for the second time in as many rounds, Morgan climbed inside the top ten after transferring from the B Main, suggesting that he is going to be a serious threat for higher honours in the weeks ahead when he finds himself starting close of the front of the grid. Others to watch include Mick Sauer and the experienced Anthony Lambert, while Kristy Bonsey has produced a couple of very strong runs in recent weeks.

Dirt Modifieds have mustered 19 drivers for their first Archerfield outing of the season, with Australian champion Kevin Britten leading the charge. There are few things more exiting that watching Britten bouncing off the cushion high on the track as he roars around the outside of the field. More often than not, his efforts are rewarded with victory but, even on the few occasions where his heroics have failed to produce the desired result, his bravery and determination have never waned. Those daring to take on Britten this weekend include category stalwart Ray Klarich and former national champ David Clark, along with former NSW titleholder Geoff Phillips and a couple of Modlite notables in Terry Leerentveld and Klinton Hancey, who is fresh from his maiden Dirt Modified feature race win last weekend in Maryborough. Hancey and Leerentveld, who finished fourth in Maryborough behind Phillips and Sam Bruggy, have completely dominated Modlite racing in recent seasons and their ascension to the Dirt Modified ranks is certainly a welcome boost for the category.

Having been beaten by Ryan Skennar in the previous round of the NuPave Formula 500 Series in a result that propelled Skennar to the series lead, national champ Liam Williams will be out to reclaim his place atop the Formula 500 hierarchy against the biggest field of the season thus far. Other than Skennar, Williams’ strongest opposition seems likely to come from his girlfriend Kristin Brown and a returning James Kennedy, both of whom finished on the podium at the rich Cane Cutter Classic event in North Queensland last weekend. Junior graduate Tarhlea Apelt has been showing solid improvement in her rookie season and seems on the cusp of procuring a podium result, while Tristan Johnson will also be a threat if he can recapture the form he carried through last season.

Lightning Sprint numbers are on the rise and they have another dozen competitors nominated to take on the big three of Kurt Wilson, Keith Blatch and Sean Iacono. This trio have accumulated a cache of state and national championship trophies between them and it is Iacono who prevailed in their previous Archerfield showdown ahead of Blatch, with Wilson crashing out early. Of the rest, Tyler Stralow and Andrew Sparks impressed last time out in finishing third and fourth, while Michael Gollagher brings a wealth of experience into the fight.

With Late Models, Microsprints and another solid selection of more than 20 Open Sedans also on the program, there is plenty of variety on offer. Gates open at 4.00pm and early racing gets underway at 5.00pm. Sprintcar time trials are scheduled for 5.30pm and the main program kicks off from 6.00pm.