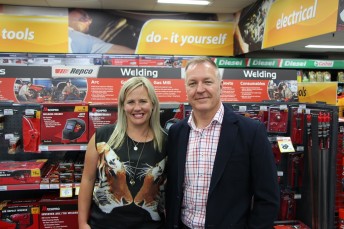 The return of New Zealand’s iconic Race to the Sky hill-climb managed by the team from Highlands Motorsport Park has gained the support of leading automotive aftermarket supplier Repco New Zealand.

The Repco Race to the Sky presented by Highlands will take place over the weekend of 17 to 19 April 2015. It’s the first time in eight years that the hill-climb has run on the gravel access road which climbs over 1,000 metres from the floor of Central Otago’s Cardrona Valley up to the Snow Farm and Snow Park in the Pisa mountain range. The Highlands’ team aims to keep the hill-climb course as close as possible to the original 14.5 kilometres in length. Highlands’ business development manager Josie Spillane says: “The Repco Race to the Sky presented by Highlands is now the longest gravel hill-climb event in the world since the sealing of America’s famed Pikes Peak hill-climb course. Undoubtedly motorsport fans around the globe will be tuning into our event and we’re delighted to have such a well-known and respected brand like Repco on our team to be part of reinventing this exciting and popular event.”

Mark Brunton, executive general manager of Repco New Zealand says: “The Repco team is delighted to be involved with the return of such an iconic New Zealand event as Race to the Sky. Repco has been part of the fabric of the New Zealand automotive industry for over 90 years and this partnership aligns Repco with a premier event on New Zealand’s – and the world’s – motorsport stage.

“Repco is committed to working with Highlands to ensure that Repco Race to the Sky 2015 is a huge success for fans and competitors alike and becomes a highly-anticipated event on the New Zealand motorsport calendar.”

Under the stewardship of Grant Aitken, the Race to the Sky was last held in 2007 when world-renowned veteran driver Nobuhiro ‘Monster’ Tajima (64) claimed his eighth victory out of nine starts.

Since Tony Quinn and his team at Highlands announced in August that they were resurrecting the Race to the Sky, the interest from competitors and fans has been non-stop.

Quinn says: “As we all know, the agreement to use the road accessing the Snow Farm and Snow Park ended, so we’ve spent considerable time talking with the new generation of landowners and other parties now involved and are very pleased a new agreement could be reached.

“It’s exciting to see how much people are looking forward to the event coming back, but I’m cautious not to build it up too much. The important thing is to make sure we run it as well as it should be and let’s see how we go from there.”

Quinn is having an 800 hp, 800 kg hill-climb car built by respected race car builder Paul Ceprnich in Melbourne so he can contest the event for the first time against numerous former competitors including Tajima who returns with an all-electric vehicle.

Queenstown-based Aitken will also be taking the opportunity of contesting the event for the first time, rather than being the event organiser.

With about two-and-a-half months until the event’s return, the Highlands’ team is at full speed as they sort the many details needed to successfully run an event of this stature.

Highlands’ general manager Mike Sentch says: “In the first year we want to grow the reputation and legacy of the event with the vision of it holding its own on the world stage and capturing the imagination and competitive spirit of some international stars.

“We’re absolutely delighted to be working with Repco as we recreate an event that captured the imaginations of motorsport fans around New Zealand and the world.

“Interested competitors and fans can expect to see more news about the 2015 Repco Race to the Sky presented by Highlands in coming weeks as we finalise the logistics of hosting up to 130 racers.”

More information about the Repco Race to the Sky and all regular Highlands Motorsport Park attractions is available on the venue’s website www.highlands.co.nz, or visit the Facebook page https://www.facebook.com/HighlandsMotorsportPark.

The Race to the Sky race route follows the access road from the floor of the Cardrona Valley, between Queenstown and Wanaka, to the Snow Farm ski area. The original hill-climb course was held over a 14.5-kilometre (9.0 mi) stretch of the gravel road. With an average gradient of 1:11, the course included 135 turns and climbed from 450 meters (1500 feet) above mean sea level to 1500 meters (5000 feet). The Highlands’ team aims to keep the course as close to the original as possible.

Two-Wheel-Drive 2001cc and over Open