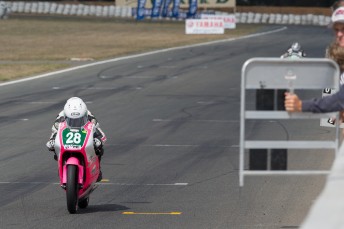 MEDIA RELEASE: The three-way battle that has emerged in the Honda Moto 3/125GP Class at the Yamaha Motor Finance Australian Superbike Championship presented by Motul Pirelli is one of the greatest talking points of the 2016 race season.

A 14-year-old emerging star Locky Taylor, an experienced racer Brian Houghton, and of course the lady of the moment Tayla Relph are all going head to head for the championship this year, and already the trio have fans guessing who will come out on top at the conclusion of the season.

With round three of the ASBK just around the corner, Relph is currently sitting in second place in the Honda Moto3/125GP Championship standings. Today, Relph explained that she is more determined than ever to take out race wins, and that she has her sights set on a Moto 3/125 GP Championship.

“The points that I made up at round two at Wakefield Park were enormous, especially considering after round one I was sitting in fifth in the Moto 3/125 GP Championship standings,” Relph shared.

“I went a lot better than expected at round two, so hopefully I can keep it up for the next round as well. I have made a few changes to my bike because it is a bit down on horse power, so hopefully with a little bit extra under my belt, I will be able to stick to being at the front this weekend.

“Although it’s a small field, it’s such close racing between the top three – we are so close in times. From a spectator’s point of view, although it isn’t a big field, we are beating all the lap records, and getting some really good results.”

Relph also shared what it’s like to be a female racing the Yamaha Motor Finance Australian Superbike Championship presented by Motul Pirelli in 2016.

“I have been one of the females out there competing for many years now, so you get used to it, and I don’t see it as a disadvantage at all,” she said.

“The only thing I find is that some of the boys don’t have to train quite as much as I do (laughs). We have been training really hard this year, and we have been taking the championship very seriously.

“My strength is rising each round, so I’m looking forward to round three and to seeing where my fitness is at,” Relph concluded.

With Relph’s mum by her side at every round offering support and encouraging the young lady in pink on the track, the pair will now make their way to Sydney Motorsport Park this weekend, with Relph determined to leave her mark on the Honda Moto3/125 GP Championship.