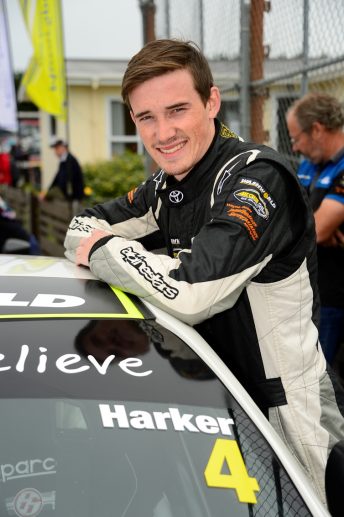 Reid Harker of Albany is making a one-off return to the Toyota 86 Championship for the first round at the ITM Super Sprint, November 3-5.

Harker, 22, is something of a single-make specialist and is rated one of the ‘finds’ of the Toyota 86 Championship. He drove three races as a stand-in for another driver in the 2013-2014 Championship and then in his first full championship year, 2015-2016 was seventh overall.

Harker then stepped up the pace with a strong run in the most recent championship and was narrowly held to second place by eventual winner Ryan Yardley.

The coming weekend will be Harker’s final outing in the #4 car that took him to second place and he is looking forward to getting back behind the wheel one more time.

Drawn by the chance to dust off his considerable skill behind the wheel of a race car, Harker says he enjoys the challenge of Pukekohe, which he describes as a ‘hustle circuit’.

“If you’re not always right on the line, hitting your braking points, and balancing the amount of kerb you use, you’re not in the hunt,” he said.

The secret to a fast lap? Getting the best launch out of the hairpin and carrying all possible speed over the top of the ‘mountain’ onto the front straight.

“Getting the kerbs right is crucial too – not enough kerb and the lap time is down; too much risks damage to the suspension or underside of the car.”

Harker says though he’s not often aware of the crowd when he is racing, the sheer ‘buzz’ of competing at New Zealand’s largest sporting event makes the weekend very special.

“The schoolkids that come through on the Friday, the people, the cars – the vibe is really different. It’s motorsport at another level,” he said.