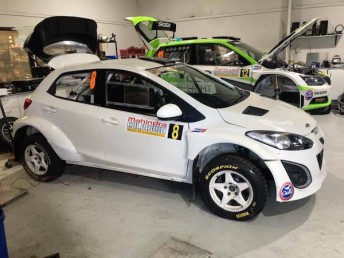 MEDIA RELEASE: Brendan Reeves will tackle the roads around Coromandel and Thames on New Zealand’s North Island when he contests the Mahindra Gold Rush Rally of Coromandel this weekend.

Reeves will drive a Mazda 2 for Force Motorsport in the fifth and final round of the 2016 Brian Green Property Group New Zealand Rally Championship (NZRC).

Whilst he is no stranger to New Zealand roads, having contested the International Rally of Whangarei APRC round four times and Rally New Zealand in 2008, this will be the first time Reeves has competed on the roads used in this event.

Reeves will be partnered by his regular co-driver, his sister Rhianon Gelsomino in the event. She co-drove in Scotland last weekend with John MacCrone and then flew straight to New Zealand in time to prepare for the rally.

After a test session in the Mazda 2 today, reconnaissance for the event will take place tomorrow (Friday) before the rally kicks off at 7.30am on Saturday, 20 August at Whitianga on the Coromandel Pensinsula.

“We had a great test in the car today,” Reeves said.

“It did feel a little twitchy but I’m sure it’s just a matter of getting used to it.

“I was really happy with the test and am excited to be driving the Mazda 2 this weekend.”

This year’s NZRC title has already been decided but Reeves is keen to compare his pace to that of his fellow competitors.

“The championship has been really strong this year so it will be great to check my times against the NZRC front runners in my first event on these roads and my first time in this car,” Reeves said.

The Force Motorsport Mazda 2 is very different to the car Reeves drove in his 2013 and 2014 Australian Rally Championships campaigns. The New Zealand model is 4 wheel drive and turbo charged unlike the 2WD version he drove in Australia. This car is an older version of the current AP4+ Mazda 2 that Force Motorsport principal Andrew Hawkeswood has driven in the 2016 New Zealand Rally Championship.

Reeves’ entry in this weekend’s event would not have been possible without the support of Force Motorsport, Pirelli and the New Zealand Rally Championship.

The Mahindra Gold Rush Rally of Coromandel is a one day event consisting of 10 stages in total (five stages each run twice) equalling 120 kilometres of competitive distance.