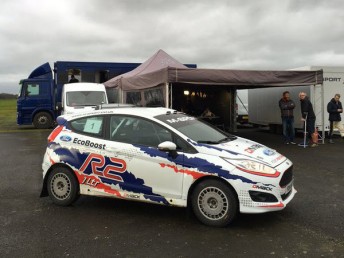 MEDIA RELEASE: After two days of fitness and media tests, and driving under the scrutiny of 2015 World Rally Championship driver, Elfyn Evans, Brendan Reeves has finished a close second in the Drive DMACK Fiesta Trophy shootout in the UK.

Reeves earned a place at the prestigious shootout after his brilliant second place in the Drive DMACK Fiesta Trophy at Rally Spain, a round of the World Rally Championship, in October.

He, along with nine other drivers (all from Europe), were at the shootout to compete for a fully funded drive in an M-Sport-prepared Ford Fiesta R2T in one round of the 2016 World Rally Championship.

“It was a great experience and I gave it my all,” Reeves said. “I’m a bit disappointed not to have won but to finish a close second shows that I gave it my absolute best.

“Congratulations to Jon on his win.”

Reeves doesn’t come away from the shootout empty handed, though.

His second placing has secured him some support from DMACK Tyres, which is still be finalised.