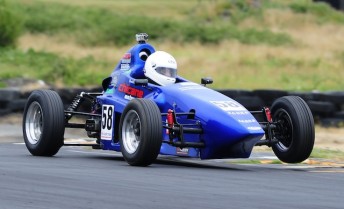 Blenheim teenager Brook Reeve takes a big points advantage into the penultimate round of the New Zealand Formula First championship this weekend and has the Rookie title within his sights.

The 17-year-old has so far racked up six podium finishes this season after winning the annual SpeedSport Scholarship back in May and embarking on a motor racing career from kartsport.

While Reeve is looking most likely to win the Rookie title, that is not at the top of his list with just two rounds of the championship remaining.

“I’m not focused on the title, just focused on getting more good results. If I achieve that then the title will come. I’m only taking one race at a time,” said Reeve.

“I know I’ve got a car that can win races. I’ve had one [race] win and I’m really keen to more before the season ends.”

Driving for Dennis Martin’s Sabre Motorsport team, Reeve has delivered some of the best results of the scholarship drivers from the 14-year history of the young driver development program.

In the six rounds contested to date, Reeve has been a regular top-six finisher and lies 5th overall in the series and top rookie among many seasoned campaigners.

The New Zealand Formula First championship has seen incredibly close racing this season, with four or five cars often side by side battling for the racing lead.

“That’s what makes this [racing] category so good for young drivers like Brook,” said Martin, the SpeedSport Scholarship co-founder.

“There is no other form of motor racing that can offer such close wheel-to-wheel action and it helps drivers like Brook to learn valuable race-craft to take forward in their careers.”

“The cars are pretty much the same, we’ve made no major changes to our cars in recent times so it’s just the driver behind the wheel that changes year by year,” said Martin.

“The Scholarship car is being driven much harder this year by Brook, and with more commitment. That’s where his results are coming from. He’s determined to give his best at every opportunity and that determination has led to his outstanding results so far this year.”

Although the season is not yet over, Reeve looks like putting up one of the better performances from the 13 young drivers that have gone before him, which includes the likes of V8 Supercar star, Shane van Gisbergen, triple NZGP winner Nick Cassidy and GP2 and Aston Martin works driver, Richie Stanaway.

“It’s been an amazing year so far,” added Reeve, “and I’m determined to end the season with more successes.”

The Formula First championship heads to Hampton Downs this weekend before the final round at Taupo over Easter weekend.