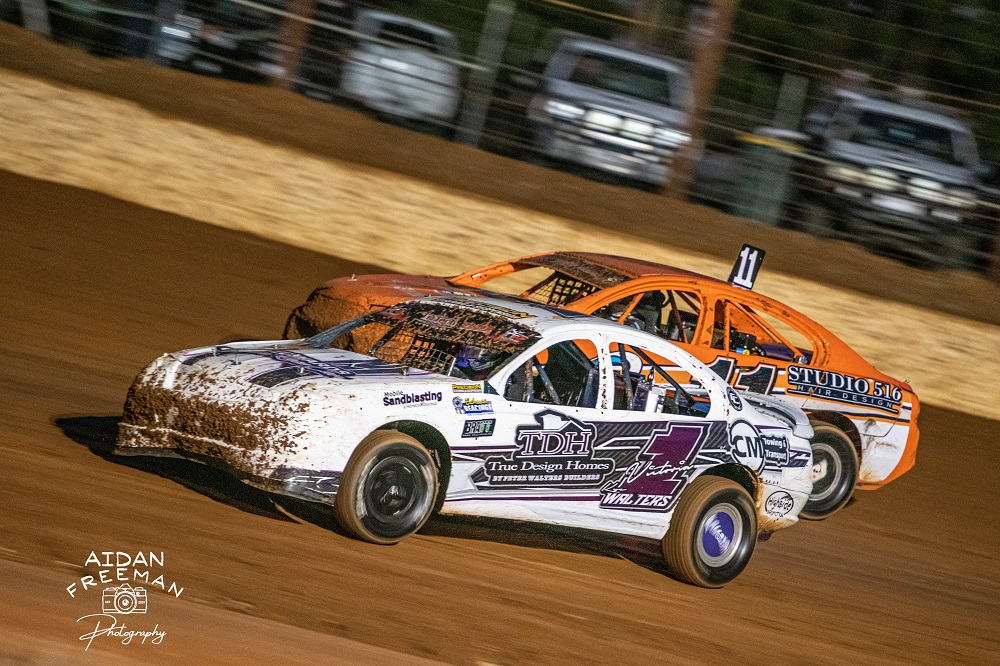 Redline Raceway’s annual end of season trophy night combined with the Ern Overall Memorial for Modified Sedans and after some terrific racing during the qualifying stages for all classes, the mountain fog drifted in and pulled down the curtain on the season finale ten laps into the feature everybody was waiting for, the Modifieds.

Redline member and class state champion Kye Walters was declared the winner of the final leading at the ten-lap mark before stewards declared the situation unsafe to continue. Earlier in the qualifying races Nick Cockerill also a Redline member racer won the first, Walters the second, Walters again in the third and Todd Atkins the fourth.

Leading into the final drivers that had not qualified in the top eight then raced off for starting positions nine to the end of the field. Ballarat racer won the ninth spot winning a dash race with Lachlan Fitzpatrick earning the tenth starting position winning a second dash. In a top eight-pole shuffle Cockerill moved from seventh up to third picking off four other competitors one by one before Walters won the pole position against Atkins.

Proceeding the Modified Sedan Ern Overall final, the Junior Sedans had completed their feature races as fog started to drop in on the venue. The Modified race got under way and Walters led Atkins, Brody Chrystie, Cockerill, and Cameron Dike. There were some incident through the lower half of the field with a couple of entrants finishing infield out of the race. When the Chief Steward had to make the decision to curtail the event, Walters was in front and declared the winner from Atkins, Chrystie, Cockerill and Dike. Amazingly, the fastest ten laps ever for Modified Sedans at Redline raceway, was the ten laps in the fog! Walters with a new ten lap record two and half seconds the previous record for the distance.

In the supporting Street Stock racing after a win in heats to Dale Morrison and then Andrew Jordan from the Alexandra club, Jordan was declared the night’s winner on points ahead of Morrison, Brad Warren, Mitch Viney and Leigh Bourke.

Scott Whittle won the Standard Saloons after Aaron Marshall, Nathan Hutchins and Whittle won the qualifiers. On points, Whittle took the win from Marshall who was second on fastest lap time after he and Hutchins finished equal points. Fourth was Jack Yeoman’s followed by Lachie Chivers.

The Belmont Speedway Drivers Club committee thanks the fans, drivers and families for their support this season and look forward to entertaining you all next season, starting from December.