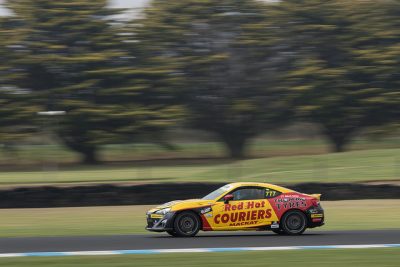 Aaron Cameron and Declan Fraser will team-up to race the #777 Red Hot Couriers Racing Toyota 86 in Class D at the upcoming season opener for the 2018 Jacuzzi Spas Australian Production Cars.

Fraser is part of the Toyota 86 Series and go kart racer, is a three-time Queensland State Champion, 2016 Race of Stars winner, and has represented Australia three times at the Las Vegas Super Nats.

“Our car was built for the Toyota 86 Racing Series in 2016 and has only ever been used in that series to date. Now with both Declan and I looking to get more racing laps and both the 86 Series and the SuperUtes set to visit Sandown later this year, it was a no brainer for us to put our entry in,” Aaron explained.

“All we had to do to change the car from Toyota 86 Racing Series rules to the APC rules was the brakes and the tyres, apart from that we are in standard trim and we were really pleased with how super easy and cost-effective it was to change the car over ready for the APC.

“We were also really pleased with the cost-effectiveness of the category – the amount of money spent on having four x one-hour races is very similar to what we spend for three x ten-lap races at any normal Toyota 86 Racing Series event.”

As newcomers to not only the APC but also endurance racing in general, the pair have modest goals in mind for round one.

“Finishing is a must! If we get to take some silverware home that will be a bonus but at the end of the day we just want some racing laps at Sandown,” Aaron said.

“We are hoping for a top three finish, but as a team it is our first go at any kind of endurance racing, so we are crossing our fingers that we have read and understood all of the rules and won’t have any issues!

“At this stage we are focusing on round one, but if we are successful we are hopeful of racing further rounds as long as those dates don’t clash with either of our racing commitments.

“Sandown all comes down to who has the most ‘ponies’ so we will get a good gauge of that in practice and will know from there what we are up against, if we go on to a track like Winton Motor Raceway we feel that our Toyota 86 will be very suited to the tight and twisty layout.

“For round one, we know that we have two very strong drivers over sprint races, but we haven’t done much in the way of endurance racing, so it is going to be a great experience for us both.”

Round one of the 2018 Jacuzzi Spas APC will kick off at Sandown Raceway across May 11-13. For more on the APC, please visit www.australianproductioncars.com.au or www.facebook.com/AustralianProductionCars or call category manager Iain Sherrin on 0422 449 446.