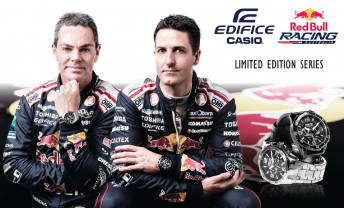 Red Bull and Casio team up to develop watch

In the time sensitive world of V8 Supercars every element of our race works on time, from our pitstops to how much fuel is left in the tank, which is why we’re delighted to have a partner and now a timepiece to help us get the job done with speed and accuracy.

A limited run of 1000 watches will be released with collector’s edition packaging and an individually numbered card for identification. The model will be available in two versions that feature either a modern stainless steel band or a classically designed leather band.

“Those elements also shape the Casio EDIFICE approach and it’s exciting that we’ve been able to work together to create a limited edition watch that everyone in the team will be proud to wear on their wrist.”

“Pursuing outstanding accuracy has always been the priority of Casio EDIFICE engineers, so collaborating with the Red Bull Racing Australia team was a natural fit, with both having such a strong emphasis on precision to the second,” said National Marketing Manager of Casio Timepiece, Sandra Cal.

EDIFICE features a vast array of functions and controls realised through advanced technology that runs the uniquely designed watch hands and disk dials. Both models are priced at $299 and will be available from the Red Bull Racing Australia online store, as well as other stockists Angus & Coote, Wallace Bishop and Myer.