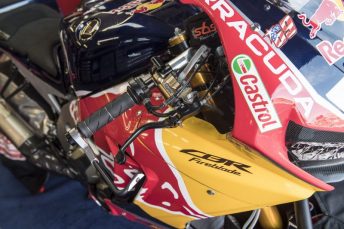 The Red Bull Honda World Superbike Team has arrived in Germany to carry out a two-day private test from tomorrow at the Lausitrzing. The team will make the most of the track time available to evaluate new parts and solutions developed for the Honda CBR1000RR Fireblade SP2 and to better prepare for the ninth round of the 2017 FIM Superbike World Championship, which takes place at the same venue on August 18-20.

With full time rider Stefan Bradl off to Japan to take part in this year’s Suzuka 8 Hour endurance race with the Honda F.C.C. TSR Team, the on-track duties will be fulfilled this time by Michele Magnoni, who already joined the team for a private test at Misano last month, and by former World Superbike rider Davide Giugliano, who will give his precious contribution and feedback to the Netherlands-based squad as an added test rider.

Ronald ten Kate, Team Manager: “With the long break between Laguna Seca and the Lausitzring, we are working non-stop to keep improving the Fireblade and to be ready for the second half of the season. This test at the German track will give us the chance to try new upgrades for the package we already have and move forward with the development of the bike. I want to thank both Michele Magnoni and our special test rider for this outing Davide Giugliano for their availability to join us. We are sure their contribution will be extremely beneficial for the team and for Stefan, who is now in Japan to race at the 8 Hour.”