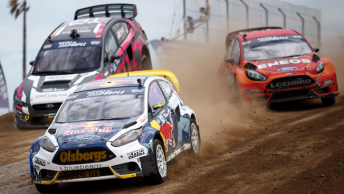 The 12-race schedule spans from May to October and will once again be broadcast on the NBC family of networks, with a majority of Supercar action broadcast live on NBC.

“We’re incredibly excited to bring our high-octane brand of motorsport to multiple new locations, as well as maintaining some of our most popular stops and returning to a fan favorite market in Seattle.

“We think that this year’s events will once again raise the bar and produce some of our most exciting action yet.”

For its sixth year, Red Bull GRC again takes racing to the fans with purpose-built racetracks in unexpected settings convenient to major markets.

The series’ tracks feature a mix of dirt and pavement, as well as a signature 70-foot jump. At each round, star drivers in 600-horsepower Supercars battle through multiple heats, semifinals, and a last chance qualifier for a spot in the winner-take-all main event. Open paddocks at every race allow fans to get up close to the drivers and cars.

This year’s slate builds on the series’ success, with new courses that are longer and faster than ever before. Recent seasons have seen the series hold events in urban locations including Los Angeles and Washington DC, as well as the first championship race ever held at an active military installation.

More information on the 2016 Red Bull GRC season, including venue details and where to buy tickets, will be available in the coming weeks at www.redbullglobalrallycross.com.