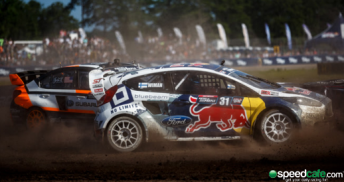 MEDIA RELEASE: The city of Dallas and the Dallas Sports Commission will play host to the third round of the 2016 Red Bull Global Rallycross season, to be held on Saturday, June 4 at Fair Park, home of the State Fair of Texas and the legendary Cotton Bowl Stadium.

This event will mark the series’ return to the Lone Star State.

“We are working diligently every year to find new markets where we can stage incredible events and continue to grow the series,” said Red Bull GRC CEO Colin Dyne.

“Our Dallas event at Fair Park will feature some of our best racing of the year on a uniquely challenging course. We anticipate this event will quickly become a fan favorite and remain on the schedule for years to come.”

The Red Bull GRC course at Fair Park will feature all of the series’ key course elements, including a challenging mix of dirt and tarmac and the signature 70-foot jump.

The world’s biggest rallycross stars, including Tanner Foust, Brian Deegan, Bucky Lasek, and defending Supercar champion Scott Speed, will face a Texas-sized challenge from both the course and each other to walk home with the winner’s trophy.

Tickets for Red Bull GRC Dallas at Fair Park are on sale now. Adult GA tickets are available at the early-bird price of $25 through April 30, while kids ages 12 and under are free with a ticketed adult. For more information and to purchase online, please visit http://www.redbullglobalrallycross.com/tickets.