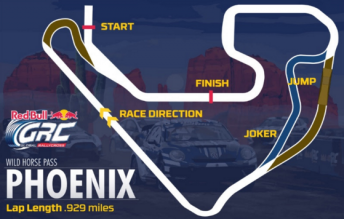 MEDIA RELEASE: Red Bull Global Rallycross is pleased to unveil the track layout for its season opener in Phoenix, taking place at Wild Horse Pass Motorsports Park this May 21-22.

The season kicks off with a brand new doubleheader, featuring dual finals on Saturday and Sunday for the Supercar and GRC Lites classes.

At .929 miles, the 12-turn course will feature a challenging mix of long straightaways, technical rhythm sections, and the series’ signature 70-foot jump. Drivers will break off into the joker lap with a hard right after turn eight, rejoining the track before another hard right leading into the course’s longest straightaway.

The course finishes with a tight right-hander before charging to the finish line.

Fans will be treated to exceptional views of the entire track with elevated grandstand seating around the course.

The paddock is located to the outside of turns one and two, allowing fans easy access to check out the cars and meet drivers between on-track action.

Don’t miss our biggest stars as they speak out about their plans for the 2016 season! We’ve got interviews with former champions and future stars up right now at RedBullGRC.com, and plenty more on the way.