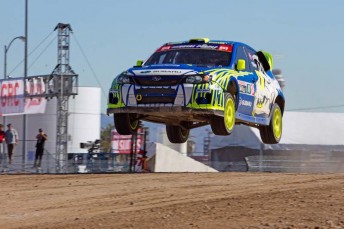 Red Bull Global Rallycross will open its 2014 season on May 17-18 in Barbados in conjunction with Top Gear Festival Barbados. The series enters its fourth season with more events, many new and returning sponsorship partners, new manufacturers, and one of the most revered driver lineups in the world of motorsport.

“We are extremely excited for the future of our series, with the great support from our TV partner NBC, our amazing line up of sponsors and the unprecedented manufacturer participation,” said Red Bull Global Rallycross CEO Colin Dyne.

The series’ 10-race schedule features a number of new events, all broadcast on network television. New partner NBC Sports Group will carry nine race broadcasts on the NBC broadcast network, primarily live, with re-airs on cable on the NBC Sports Network. The full 2014 Red Bull GRC schedule is as follows:

The series is proud to welcome Red Bull as its new primary strategic partner for the 2014 season, the first year of a multi-year relationship, as well as new tire supplier Yokohama and new partners Fram and Odyssey Battery. These companies join an established list of series partners including Royal Purple, Sylvania, GoPro, and Motegi Racing, all of whom return from the 2013 season. Manufacturer partners include Ford, Subaru, Volkswagen, Hyundai, and Chevrolet.

*X Games Austin, the second event of the season, will be broadcast live on ABC.