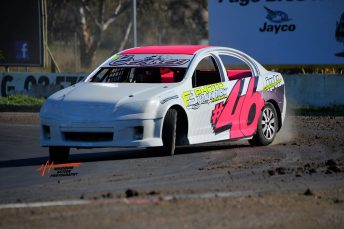 Winton Motor Raceway held its second Speedway Sprints backing up on last season’s success with a two day event in July combining with the first ever appearance of RX Aus at the venue to give motorsport fans Speedway and Rally Cross across the weekend.

Classes participating in the Speedway Sprints were Street Stocks, Standard Saloons, V8 Open Sedans and 6 Cylinder Open Sedans with only one winner from last season backing up to claim the top prize once again, Anthony Beare the Mount Gambier steerer who took out the top time in the Street Stocks for the second season running, he did so in the very last session of the weekend.

Times in the practice session showed us that Super Sedan driver Trent Susol was determined to claim the top prize in the V8 category and Daniel Unternahrer last year’s winner was equally as determined to defend in a different vehicle.

Husband and wife duo Trish and John Dike were keen on the Standard Saloon top prize as they book ended young gun Adrian Lawrence in the practice session, what was to come was a weekend long battle between Lawrence and John Dike with 15 year old CAMS licence holder Lawrence dragging Dike along to new incredible times.

In 6 Cylinder Open Sedans Allen Treble threw his hat in the ring and Winton Circuit racer Mick Pettit from Leeton in New South Wales showed that the experience he has had in the last twelve months racing in the TT track series had given him great pace, in Street Stocks Lewis Clark, Beare and Steve Watts looked like the top drivers to keep an eye on.

Moving into session one of the Sprints, Susol cut more than 3 seconds off his practice time in what became a new Speedway Sprint track overall record of 1 minute 10.5240 with Unternahrer and Darrin Dunham in a Commodore with a FC Holden body the next best yet two seconds slower.

Lawrence lapped a second faster than his Standard Saloon practice time as Matthew Domburg took a liking to the track and started to put in competitive times, Charlie Ball a small circuit racer from Wilby Park in a VH Commodore took the lead in the 6 Cylinder class with Simon De Boer and Allen Treble who were sharing the same XF Falcon sitting behind in second and third. Lewis Clark in a VY Commodore led Watts and Beare in the Street Stocks. Lawrence, Ball and Clark were all new record holders for their classes at this point.

Winton in the days prior to the event had made an announcement that racers did not have to conform to tyre rules they were use to by their Speedway governing bodies and as a result, many brought in slicks from Eddie Albenica’s of Melbourne’s Cheapest Cars. Eddie himself a racer of note in many classes over the years.

In session two, the FC Holden with Dunham at the wheel emerged at the top of the charts with a blistering 1 minute 09.8640 second time and Susol who thought he was flying left the circuit with a 9.9360 right behind Dunham, these times were around 3.5 seconds quicker than last season with David Hastings clocking a 10 second bracket time.

Dave Cherry in his VZ Commodore and Ben Moon both of the Alexandra Speedway Club just down the road from Winton then moved to the lead of the 6 Cylinder class with Cherry hitting a 13.3630 and Moon half a second behind, in the Standard Saloons Lawrence went another half second quicker than he had already and John Dike dropped under the 14 second make into the 13s for the first time.

Session three provided a sensational moment on Sunday morning. With a clear track ahead of him, fresh tyres and no wind, Graeme Harrison in his VN Commodore stopped the clock at 1.07.4840 a clear track record for Speedway V8 Sedans.

Up to this point Harrison had been running around the 12 second bracket and the time sent the announcer scurrying to check did something go wrong in the timing. Winton officials advised that the system from point A to point B had to be correct, the only way it was wrong is if Harrison came off track at full speed and cut corners, there was no such claims, therefore Harrison became the man to beat with his amazing effort that will take some beating in the future, as the rest of the day proved.

Lawrence in his Standard Saloon blew pundits away when the ‘kid’ dropped into the 12 second bracket smashing everybody else in the third session for his class, Nelson remained fastest in the Street Stocks with Darryl Atkinson having a good run in the session and Lewis Clark still proving fast even though he started to share Steven Watts car after the Clark race car suffered engine concerns the day before.

In 6 Cylinder Sedans Pettit was fastest in the third session in his last big dash for the overall win whilst Treble and Cherry were still there a bouts with Cherry’s earlier time in session two still the lead time.

Session four in the V8 Sedans seen Hastings and Susol really try and shake the time that Harrison had set earlier and for Hastings he would have become the leader if it wasn’t for Harrisons blistering run in the previous session. Hastings and Susol both in the 9s.

Lawrence again caused the timekeeper nightmares when he clocked 12.5730 in the fourth session for Standard Saloons, it was simply sensational to watch the racer clock new time after new time consistently. Try as Jay Dickson and Hayden Clifford might, they couldn’t dislodge Domburg in third spot.

De Boer in the 6 Cylinder Sedans took the lead ahead of Cherry whilst his car owner Treble moved into third place. De Boer clocked a 13.2140 time to hold the new 6 Cylinder Open Sedan record for a brief moment and Darren Forrest whacked slicks on his car and shot to second in the Street Stock times behind Nelson. Forrest clocked a 12.8270 just .0700 behind Nelson with one session to go.

The final session of the weekend proved to be the best in regards to competition in the V8’s and records in the Street Stocks and 6 Cylinder Open Sedans.

Former two time Victorian Speedway Sports Sedan champion Moon in the 6 Cylinder Open Sedans, then recorded a time 2.5 seconds faster than the times for the whole weekend in his class setting a 10.7560 whilst Treble moved into second place with a 12.160 and Cherry who clocked a last session 13.2630 was just .0490 behind De Boer for the third place trophy.

Scary thing for competitors in the class was that Moon was only just getting used comfortable with the track and hitting his marks and thinks he can go faster next time!

Domburg was the fastest of the Standard Saloon competitors in the final session securing his third spot for the weekend when he ran a 13.5470 time with Lawrence well off the pace in the last session having worn out his tyres and in Street Stocks a sensational finish seen Forrest take the lead with a 11.8280 ahead of Nelson only for Beare who jumped from his VE Commodore into Lenny Bates FG Falcon with slicks on scorch around Winton in a new Street Stock track record time of 11.0710 to take the Speedway Sprint win from Forrest.

Interestingly enough, the Sportsmanship by Bates to let Beare have a crack with slicks on, knocked Bates out of the top three for the weekend.