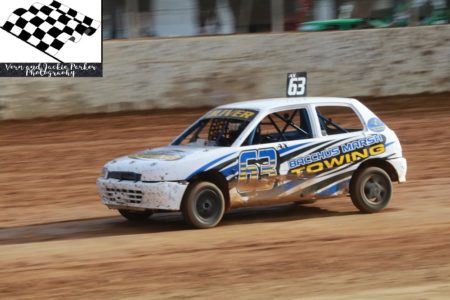 With opening night of the race season for Alexandra & District Speedway Club officially done much of the talk has been about the speed of the track with a new track surface as Junior Sedan records were broken and about the health of two racers who had a huge back straight crash rolling their cars simultaneously before being attended to by rescue and medical crews as the meeting closed early.

Shaqkira Blake and Tenayah Barton both walked away from their cars with what was diagnosed as minor injuries whilst their cars will need some repair.

The race night was the ‘High Country Cranes’ Junior Night and in the Speedway Sedan’s Australia Juniors, the class raced under the two gradings of Top Stars and New Stars. The New stars racing provided nine qualifying races full of action with Jacob Tinworth from the Hamilton club winning all three of his races as he qualified into the final. Other winners in the lead up to the main event came from Fletcher Barron, Toby Parks and James Oliver whilst in a sub-section for the evening for new rookie drivers, Billy McBride won two heats and Nathan Miles the other as the kids gained valuable experience amongst others with equal amount of racing.

In the feature race it would be Christine Oliver who would lead from the drop of the green flag. Following her Tinworth, James Oliver, Blake Glynn and Maddy Capon zipped in and out of traffic as they made their way around the 570-metre-long racetrack. On lap seven though the race leaders race ended with mechanical concerns and her brother James used traffic to advantage to hit the lead as he passed Tinworth.

James Oliver recorded the fastest time of the race as he secured an exciting win from Tinworth, Glyn, Capon and Barron.

The Top Stars class for Juniors with two years’ experience or deemed to have the ability to compete with the fastest of the Juniors also had their own trophies to race for. Six qualifying heats for their final seen wins to Jaxson Vella, Jayden Bryant, Rhys Meakins, Bryant once again, Vella a second time and Linken Paterson in the final qualifier.

A fifteen-lap final was slated to be held and the green flag got the race underway with Vella, Bryant, and Canberra registered racer Jack Murphy motoring along in the top three. Lap four though would see the end of the race due to a high-speed serious crash where Shaqkira Blake rolled six times almost landing on the crash crew vehicle in the safety zone. Tenayah Barton rolling at the same time finished up just behind Blake on the infield. The race was declared at this point as the positions were on lap four as the top few cars had crossed the line. Vella was declared the winner, Bryant second, Linken Paterson third, Murphy fourth and Dylan Barrow in fifth.
Also competing for a feature event was the Victorian Speedway Council Junior Sedans, a handy field of competitors came together with the annual feature event gaining momentum as a must come to event. Dylan Barrow from the host club won heat one whilst Bradin Claridge from Bendigo won the next two in front of Barrow. Claridge secured a new heat race record along the way when he was two seconds quicker than the previous mark.

A very quick fifteen lap final was then run with Claridge again displaying the development he has made over the last two seasons proving to be two quick for Barrow once more. Another new record for Claridge, this time for fifteen laps as he secured victory from Barrow, Rhys Meakins, Marcus Maclean, and Abbi Garlick.

The nights racing for the Sports Sedans and the Standard Saloons were declared on the top three points results with no features held due to the accident.

Healesville racer Steve Kershaw was declared winner of the Sports Sedans with Luke Fallon in second and Harry Orme third. Fallon and Kershaw were close to the class record one lap time and if given a final, there was every chance that record could have be obtained. Kershaw, Lee Beach, Kershaw again, Ricky Cornwall, Luke Fallon and Harry Orme all won heat races.

Next meeting for Alexandra Speedway will be on March the 20th with a Wingless Sprintcar feature along with the Unlimited Sedans and club classes.