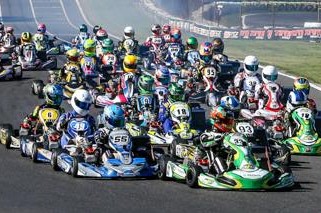 The opening round of the 2020 SP Tools Australian Kart Championship presented by Castrol EDGE has seen an influx of entries to re-write the record books for the sport.

A massive 316 entries have been received across the eight classes to be contested at The Bend Motorsport Park in South Australia on February 28 – March 1.

In the elite KZ2 class, Queensland driver Troy Loeskow will unveil the prestigious green number one plate as he strives to kick off his championship defence in a winning fashion. Among the 26-strong grid of drivers in the KZ2 class is former Champion Chris Hays, who will be making his 50th round start at the event – the most by any competitor in the history of the championship, and Team 18 Supercars Endurance driver James Golding – who was victorious at the final round of 2019. There are also six entries in the KZ2 Trophy division that has been introduced for 2020.

Never before in Australia has there been so many entries at an event for the highest level of junior karting, KA2. With 47 drivers set to do battle, it surpasses any other entry list in an elite junior category. Included in the field are representatives from every State of Australia and six drivers from across the Tasman.

Along with the KA2 class, Cadet 12 and KA3 Senior are both also over-subscribed with close to 60 entries being received for both classes.

Also being contested will be the Cadet 9 class, where drivers as young as seven will be behind the wheel, the one-make X30 class and the multi-engine TaG 125 category.

“To have such an incredible number of entries for the opening round of the Australian Kart Championship is simply incredible. Year on year, the numbers continue to build and the level of competition continues to rise,” said Karting Australia Chief Operating Officer Lee Hanatschek.

“To have every State and Territory represented along with 14 drivers from New Zealand and licence holders from Singapore, Hong Kong and Italy is very pleasing.

“It is the first time that an Australian Kart Championship round has been contested at The Bend Motorsport Park and we are looking forward to showcasing our sport at such a fantastic facility.”

Practice for the event will be contested on Friday, February 28 ahead of qualifying and the heat races on Saturday February 29. The finals will be held on Sunday, March 1.