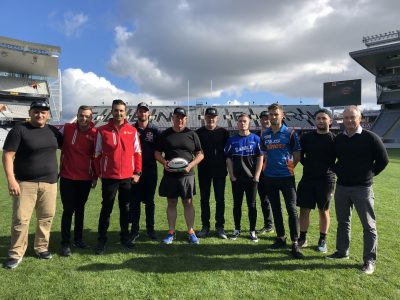 Supercars return to the spiritual home of motor sport in New Zealand, Pukekohe Park Raceway, in November this year after launching the event in Auckland today.

All five New Zealand drivers in the Virgin Australia Supercars Championship – a record number of Kiwi drivers in the field –were on-hand today at Eden Park, after a series of promotional activities around the city ahead of the November 2-4 event.

“As a proud New Zealander I am delighted to bring the world’s best touring car Championship to our Kiwi motorsport heartland once again,” Supercars CEO Sean Seamer said.

“New Zealand has a very rich and deep history in world motorsport and we are proud to have five Kiwi drivers currently racing in the Championship.

“To be able to come home and show their wares to such a passionate support base in New Zealand is very important to them and to us.”

“Supercars and the top ranking Kiwi drivers have a strong fan base in New Zealand, and the ITM Auckland SuperSprint is a great chance for Aucklanders and New Zealanders to see world-class motorsport and our own drivers here on home turf,” he said.

“The event has generated $35m for the regional economy in the past five years, its broadcast helps promote Auckland to domestic and key international target markets, and its timing in the visitor shoulder season, when there is plenty of accommodation capacity in the region, aligns well to the new Destination AKL 2025 strategy.

“It also provides valuable experience for the hundreds of volunteers who train and take part every year, a showcase for Ngāti Tamaoho to share their culture at the venue and in the event broadcast, and the chance for thousands of Auckland school children at all levels to participate in the Students on Track educational programme.”

Championship leader Scott McLaughlin, who has dominated the season so far, is fired up about coming home to the circuit he cut his teeth on as a young driver.

“I am stoked,” McLaughlin said. “It means so much to me and all of the Kiwi drivers and those who work within the teams to be able to race at home. Hopefully this year I can finish off the Championship by setting it up at Pukekohe in November.”

“We love it here and any chance to come home is great. But to come home and race in front of so many Kiwis at Pukekohe is next level. It is a huge buzz to compete at the highest level in front of your home crowd.”

This year’s event is expected to lift attendance past the two million mark since Supercars first race in New Zealand in 2001.

The players held a kicking competition on the hallowed turf at Eden Park, led by All Black great Grant Fox.

Tickets for this year’s ITM Auckland SuperSprint can now be purchased through Supercars.com and Ticketek.