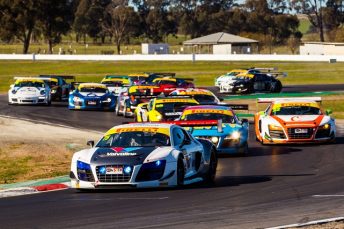 A record field is set for Round 3 of the CAMS Australian GT Trophy Series presented by Pirelli, which heads to Queensland Raceway this weekend (August 5-6).

Boasting 21-cars across three classes, Trophy, Challenge Modern, and MARC, the field promises to deliver a thrilling weekend of competition around a circuit renowned for exciting racing.

Queensland Raceway marks the halfway point in the Australian GT Trophy Series, which has already seen nail-biting battles at both Sandown and Winton Motor Raceway.

The quartet of Audis will again battle it out this weekend, with McLaughlan looking to extend his series lead.

The Audi R8 LMS Ultra pilot holds a commanding position at the top of the table, though came under intense pressure last time out.

Around a circuit which has traditionally favoured Lamborghini and Porsche, he’ll also face a renewed challenge from Jan Jinadasa (JJA Consulting) and Richard Gartner (Safe-T-Stop), both aboard Lamborghini Gallardos.

Upholding the honour for Porsche in Trophy Class will be Emanuel Mezzasalma (Harcourts Epping), who has demonstrated strong pace already in the Porsche 997 Cup Car, as will series debutants Garry Mennell and Kean Booker who’ll share a similar car for On Track Motorsport.

Rick Mensa also stands as a strong contender, having quietly gone about his racing to sit third in the title race in the CCC Polished Concrete Audi R8 LMS and Travers Beynon continues making strides forward in the fearsome black and gold Audi.

Having shared driving duties so far in his Australian GT career, Rio Nugara is ready to race solo for the first time aboard his Eat Furniture Audi, while the ever consistent Con Whitlock (Whitlock Bull Bars) will again be looking to pickup a healthy haul of points from his journey north.

Ferrari is well represented, with Wayne Mack returning to the fray in the Mack Bros Roofing Products Ferrari 458 GT3 in Trophy Class, with three more entries from the Prancing Horse in Challenge Modern.

Newcomers Jamie Arratoon and John Nikolovski (Aranik Racing) will also line up in a Ferrari 458 Challenge.

Having competed in the Australian GT Championship with Mark Griffith, Jake Camilleri returns to the MARC Class this weekend aboard a MARC Mazda V8, with one other entry for MARC Cars Australia still to be confirmed.

The packed grid is rounded out by Geoff Taunton and Jason Busk, who’ll once again share a MARC Focus V8 for Eastgate Engineering.

Action at Queensland Raceway gets underway on Saturday morning with practice and two 20-minute qualifying sessions.

That will set the grid for the first of two 50-minute races on Sunday, which will feature the added spice of pit stops and driver changes.