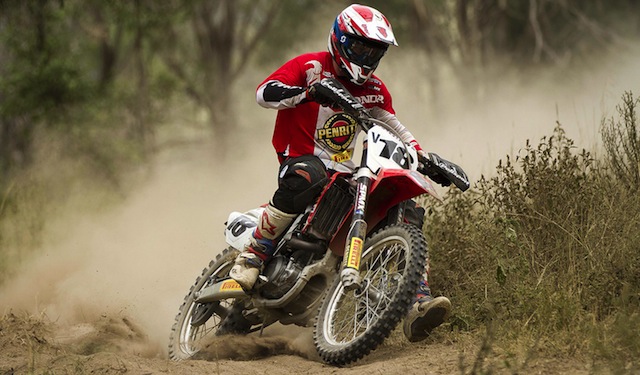 MEDIA RELEASE: bikes, offroad – The popularity of the Hattah Desert Race has skyrocketed with capacity fields for all classes reached in record time. Entries opened on May 1 and within just six hours, 605 competitors (205 juniors and 400 seniors) were confirmed.

The challenging off-road race, which is run by the North West Victorian Motorcycle Club, is now in its 17th year and will be held northwest of Mildura on July 3-5.

The race weekend caters for riders from junior to professional with 19 different classes racing varied distances across the weekend.

“The Hattah Desert Race is one I look forward to every year,” Price said. “The conditions are tough and it is a real test.

“As is evident by the entries the event is getting growing in popularity every year. It is great to see that entries filles so quickly for 2015.”

After finishing third at the Hattah Desert Race on three occasions, Peter Boyle is on a mission to claim the elusive number #1 placing.

“I am really hoping this year I can string it all together, make the end of the race and try and break into the top two spots,” Boyle said

“This is one of my favourite events. It is an awesome three days away and each year it continues to grow. The beauty of it is that it is an event that caters to all types of riders.

“It is also fantastic for the sport to see so many juniors confirmed this year,” Boyle continued.

The 2015 event marks the first year of a multi year partnership between Penrite Oil and the North West Victorian Motorcycle Club (NWVMC).

Penrite Oil Company Corporate Partnership Manager, Jarrod Harding said the new relationship between Penrite Oil and the NWVMC would provide a solid foundation and continued growth of the Hattah Desert Race as the event heads into a new era.

“We are very proud of our association with the North West Victorian motorcycle club and the Hattah desert race,” said Harding.

“Penrite being an Australian family owned and operated business are always looking to support junior development, family friendly events and the ability to show people just how good our products outperform the competitors in the harshest of environments.”

As part of Penrite Oils naming rights sponsorship of the 2015 Hattah Desert race the Penrite team will be on site right across the weekend with technical Motorcycling assistance and advice. Penrite will also be present for merchandise and oil/lubrication sales.

The Hattah Desert Race is not just for racers, Friday nights scrutineering session is a spectacle to behold with all competitors’ converging on Langtree Avenue from 5pm.

Over 600 motorcycles will be on display and the evening will include live bands, big screen tv coverage, rider interviews and alfresco dining.

For more information about the Hattah Desert Race visit http://www.nwvmcc.com