Record-breaking weekend for Sargent at Winton

Record-breaking weekend for Sargent at Winton 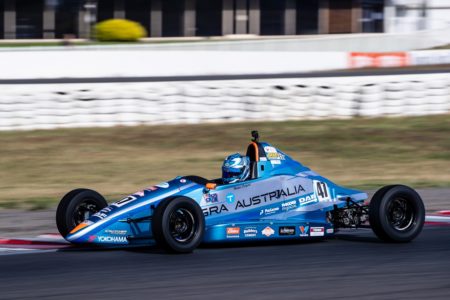 Young racing driver Tom Sargent has left Round 2 of the Victorian Formula Ford Championship at Winton Motor Raceway elated, after breaking the circuit lap record on no less than three occasions.

Sargent first demonstrated his CHE Racing Team car’s pace in qualifying, when he took pole position with a scorching 1:24.6 – the fastest ever time for a Formula Ford around the regional Victorian circuit and a whopping 1.6s faster than his nearest rival.

“During practice on Friday, we worked hard on car setup and made some significant gains. By the time we reached qualifying, it felt like it was on rails and gave me the confidence to drive to the absolute limit,” Sargent said.

However, Sargent was eyeing the official lap record and for that, he would have to wait until race time.

“While I was thrilled with my qualifying performance, it didn’t count as an actual lap record because it wasn’t set during a race,” Sargent explained.

In race one, held on Saturday, Sargent’s aspirations were dashed when a heavy shower of rain soaked the circuit shortly after the race commenced. The appalling conditions left the officials with no choice but to stop the race and declare it a non-event.

“The conditions in the first race became very bad very quickly, so we were all relieved to get back into our warm, dry garages,” Sargent said.

Fortunately, the weather improved significantly overnight and in today’s two races, Sargent was on fire. In race two, he broke the lap record (previously set by Hamish Ribarits in 2018) on two successive occasions, before further lowering the benchmark in race three.

“In the second race, the conditions were perfect and I was pushing hard. I actually think the rain on Saturday helped – it cleaned the track for today’s races and there was a lot of grip.

“I wasn’t really expecting to go faster in the third race, but I pushed hard once again and managed to break my own record. To break the lap record three times in one weekend is very satisfying.”

With another three race wins under his belt, Sargent remains undefeated in Formula Ford competition during 2021 – he has won all six Victorian Championship races as well as taking a clean sweep in the opening round of the Australian Championship.

“It’s nice to continue the winning run, and it’s a great boost to my confidence to have gone so well at Winton – it’s a track where we’ve struggled in the past,” Sargent said.

Sargent’s busy 2021 schedule continues next weekend when he lines up alongside Lachlan Mineeff in the CHE Racing Toyota 86 for the Hi-Tec Oils Bathurst 6 Hour production car endurance race.