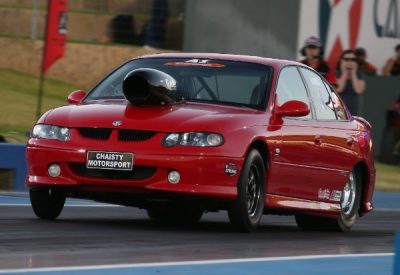 Two of the record-setters not only blitzed the time boards, but also the Super Stock ranks, hoisting the winner and runner up trophies in the bracket by the end of the weekend.

While Ioannidis took the event win and Chaisty the runner-up honours, both racers claimed records.

“It wasn’t really expected, normally at the Westernationals the conditions aren’t really that good (for record-setting) so you don’t really expect to go that fast,” Chaisty explained, while thanking A1 Hi-Performance, C&R Motorsport Developments, Motorsport Database and Applied Automotive for their support.

“We were just trying to do enough to win that race and didn’t expect to go that quick, but it was good to set the record. We were happy with the weekend and to race Jim in the final – it was a good weekend overall.”

For Ioannidis, the record was the cherry on top of a strong weekend which played a vital role in his championship chase ahead of this month’s Grand Final event (Adelaide International Raceway, March 23-24).

“We race together as a team and without them, I do nothing; so, this is for all of us and I am absolutely stoked with what they do for me. In three weeks’ time we will run at the Grand Final, and hopefully come home with the Gold,” Ioannidis said at the trophy presentation, while thanking Light Vehicle Solutions, Bullet Race Engineering and the whole team from SCM for their support.

In the Modified bracket, the two-times Westernationals Modified winner Althuizen and his Ford Boss Hemi made it all the way to the semi-final, where a loss wasn’t all bad thanks to a record-setting ET.

“The national record was our goal for this year – last year I missed out on the national record at the Westernationals but went on for the win. At the WA Grand Final we reset the track ET record to a 7.499s ET, but we couldn’t make the MPH record,” explained Althuizen.

“Over the Winter break we set about developing more power with the aim of getting the national record, both ET and MPH.

“We came back for a practice recently ahead of the Westerns, and then on the weekend it didn’t really look like things were falling into place for us to actually reset the markers – but in that semi-final loss I ran a 7.623s and that was the one percent to back up the faster time and secure what was the whole goal for this year – the national record.

“There is a real sense of achievement there, as my whole year of racing was focused on this one meeting and this one opportunity to present a record for my sponsors and we were able to do that.

“I am very happy to have been able to secure it for my supporters – there is the race car builder and general guru Ian Jenkins at JPP, Speed Torque who handle the engine machining and cylinder head development, and of course the awesome performance is very dependent on the torque converter by Simon at All Fast Torque Converters.

“The next goal is the MPH record, we are going to go back to the drawing board and see where we can go from here to get that.”

For Paton, the record was a key goal for the weekend, although he had trouble deciding what was a bigger priority to shoot for – the win or the record.

“I didn’t manage to back up the 8.18s I ran (on Saturday) but we managed to knock (the record) down to an 8.34s, so I am pretty happy with that,” said Paton, who thanks Pace Motorsports, Perth Quad Bikes Polaris South, Statewide Oil Distributors and Straightline2ten Panel and Paint for their support.

The final round of the 2017/2018 Summit Racing Equipment Sportsman Series will be held at Adelaide International Raceway across March 23-24. For more information, visit www.andra.com.au and www.adelaidedragracepromotions.com.au