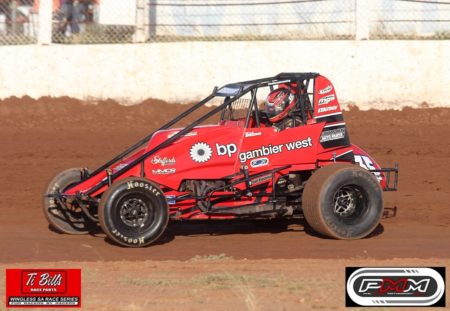 The Ti Bills Race Parts Wingless Sprint SA State Series heads to Mount Gambier for Round 2 of the four-event series this Saturday, December 10. The local hometown contingent of Mitch Broome, Kirby Hillyer, Rory Button and Kahn Aston will compete in the record-breaking 56 driver line up with Broome hoping to become the second feature winner of the inaugural Ti Bills series after recording a runner-up finish at Whyalla in the opening round.

“I can’t wait to get back to Borderline to race against a big field of some of the best drivers in the country. It’s always good when the big meetings come to town and I hope I can go one better than I did in the first round of the Ti Bills series” added Mitch when we spoke as he prepared for Saturday night.

“With a lot of rain outs and cancelations lately there is a big field of cars from Victoria who have come across along with the South Aussies so it should be a tough event and hope I can go well, but also just bank some more points towards the Ti Bills series”.

In addition to Broome, Kirby Hillyer will also be a tough driver to beat on his home track as he is a perennial front runner in his immaculate #86 whenever and wherever he competes while Rory Button, who is a former Australian Champion, has been highly competitive since returning to the class after a stint in Sprintcars.

After an all-the-way win in round 1 dual Australian Champion Joel Chadwick goes into round 2 as the series leader and he too is another driver who is extremely fast at the 372-metre clay way having recorded a runner-up finish at the venue in the South Australian Championship 12 months ago.

Current State Champion Tyson Martin returns to the venue he captured the SA#1 last December and after missing the opening round he won’t have the points chase to consider, so he will just be all out for the feature win. Martin is already a dual feature winner this season at Murray Bridge. The talented South Australian line-up also includes Jack McCarthy, who also has two feature wins this season, Keke Falland, who was third at Whyalla, Hayden Vickers, Rylan Furler, Robert Heard, Nate Trewin, Anthony Tapley, Harley and Jesse Alexander, Bronson Mauro and William Caruso.

But with the second round of the Ti Bills Series being contested so close to the Victorian border a highly competitive Victorian contingent will be out to upset the locals including former Australian Champion Alex Ross, dual Victorian Champion Luke Storer and former Australia #2 Luke Weel. After finishing fifth in the opening round Mildura’s Jordon Bolitho comes into the Borderline event as the highest-placed Victorian and he will expect to be upfront once again while the likes of Blake Walsh, who has been racing quite regularly against the South Australians this season, his sister Carly, Christopher Halesworth, Aaron Kennett, Matthew Symons, Luke McCutcheon and Harry Ross will also be hard to beat.

With such an impressive entry list the format for the night’s action will feature time trials in hot laps, 10 heat races, a D (if required), C and B-Mains prior to the top 20 drivers contesting the 30-lap Cleanaway supported A-Main.

Round 2 of the Ti Bills Race Parts Wingless Race Series will be proudly supported by: